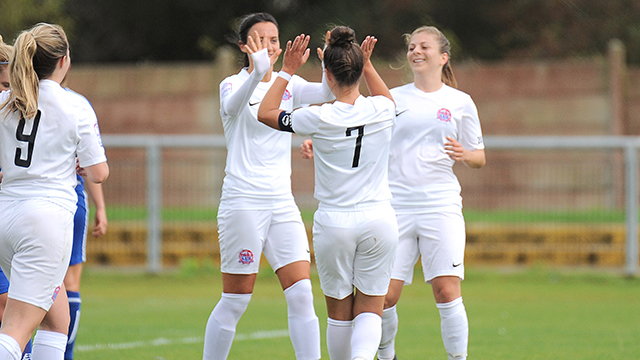 Fylde Ladies continued their impressive start to the season with a narrow 3-2 victory over Burton Albion Ladies in the FAWPL Plate.

Debutant Holly Kelsh was the match winner for Conrad Prendergast’s side after first half-half goals from Sophie Charlton and Lauren Davies had been cancelled out.

The Ladies will now host Leeds United Ladies in the second round of the competition.

Played at Leigh Sports Village due to a waterlogged pitch at Kellamergh Park, the match kicked off with Fylde quickly proving themselves to be the stronger attacking side.

The early pressure soon paid dividends and the hosts opened the scoring inside seven minutes. Following a series of neat passes inside Burton’s half, a ball over the top found Charlton, who had made an intelligent run in behind the defence, leaving the striker to stroke her shot into the bottom right corner.

However, the lead however didn’t last long as the visitors equalised in bizarre fashion. Within moments of the restart, a lapse in concentration saw a wayward back-pass catch out goalkeeper Rachel Darbyshire and cross the line before she could clear.

Fylde continued to press and got their reward shortly before the break. More neat exchanges in the final third, culminating in a pin-point cross from the left, saw Davies finish off a nice move.

Once again, the hosts could not hold onto their advantage and Albion were back on level terms soon after the interval. Indecisive defending from Fylde allowed the Burton forward to unleash a strike from outside the box which nestled into the top corner.

Second-half substitute Holly Kelsh, making her Coasters bow, put the home side back into the lead with 15 minutes to play when she surged though the Burton defence and fired into the top corner.

Fylde’s Natasha Flint came close to providing some breathing space in the closing stages after receiving the ball on the edge of the box, however the goalkeeper was quickly out to smother her strike.

Midfielder Leah Foster had an opportunity to finish the game in the final minute with the goal gaping but put her shot wide off the post.

After the final whistle, Fylde Ladies Head Coach Conrad Prendergast, said: “It was a good result overall but in terms of performance it probably wasn’t our best.

“We did well in spells but over the 90 minutes we’ve not hit the heights that we know we can.

“We always want to be at our best in every game and when we’re not, it’s a bit of a disappointment.

“Stand out players for me were Eve Kennerley and Holly Kelsh. Eve did very well, she was positive and got on the ball throughout the game. Holly, who when came on in the second half, showed a phenomenal work rate on her debut.”