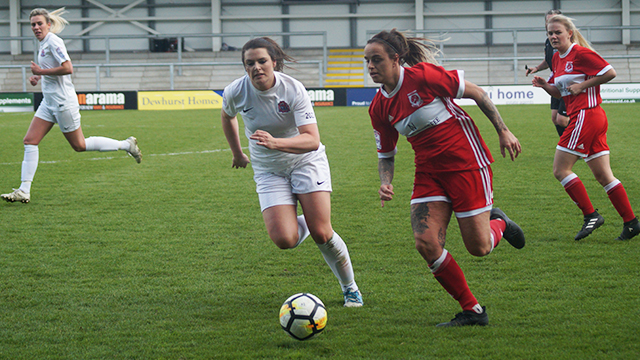 An unlikely hat-trick from defender Jenna Carroll’s ensured that the Ladies, who twice trailed during the game, bounced back from a heavy defeat against Blackburn Rovers Ladies just four days previous.

Conrad Prendergast’s side got off to the worst possible start at Mill Farm against high-flying Boro when a loose back-pass was intercepted by Bianca Owens and slotted into the far corner.

The contest was wide open and two goals in four minutes from the hosts over the half-hour mark turned the game on its head.

A cross from the right looped over to the back post where Carroll sneaked in and directed a header into the bottom corner.

Moments later, Leah Foster pounced after Sophie Charlton had been denied to tuck the ball into the gaping goal from close range.

The first-half scoring wasn’t over and Boro were back on level terms when Owens lashed a stunning dipping volley out of the reach of Rachel Derbyshire from 20 yards.

Not to be outdone by her teammate, Middlesbrough forward Tyler Dodds put the visitors back ahead in style shortly after the break when she cut inside from the right and curled a sublime strike into the opposite top corner.

Lauren Davies and Charlton both a had chances as the hosts pressed, whilst substitute Danielle Young went close after gliding past two defenders and firing over.

The deserved equaliser arrived on the hour when Young’s deep free-kick from the right was powered home at the back post by Carroll.

And it was the Coasters centre-half that had the final say. Emily Hollinshead stormed from one box to the other only to be stopped in her tracks by a rash challenge as she went to pull the trigger. The referee pointed to the spot and Carroll sealed her treble with an emphatic finish.

Fylde skipper Danielle Young was proud of the performance: “We were very good, however we let it slip at times. Overall though, I think it was a fantastic performance.

“We worked hard, dug deep and we knew that’s what we had to do especially on the back of Thursday’s defeat. We needed a change in our attitude and everyone stepped up to the mark. I couldn’t have asked for any more.”

Centre-half Jenna Carroll admitted her goals have been coming: “There have been too many times during games when I have come close to scoring. I do feel like I can contribute more to the goal tally and I’m delighted to have done that. Danielle put in two great crosses for me and thankfully I found the back of the net.”