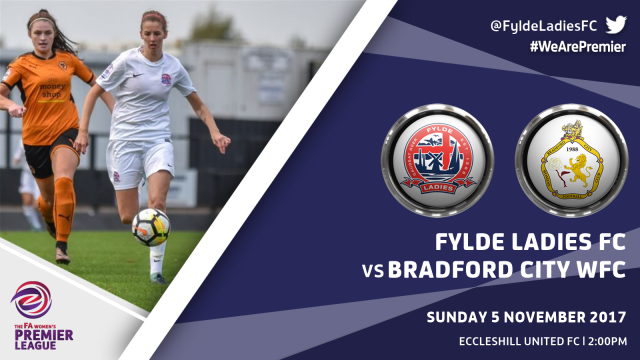 Fylde Ladies are aiming to maintain their unbeaten start to the FA Women’s Premier League season when they travel to Bradford City Women on Sunday.

The Yorkshire side currently hold the bragging rights this term having knocked Fylde out of the FAWPL Cup in September. Goals from Sophie Charlton and Veatriki Sarri meant the game finished 2–2, with Bradford eventually winning 3-2 on penalties.

Fylde have made a positive start to the league season having won three and drawn two of their opening five fixtures.

Fylde were also victorious in their last league outing, Natasha Flint scoring the only goal of the game against Wolverhampton Wands Women.

Looking ahead to Sunday’s game midfielder Lauren Davies said: “We know that Bradford are a strong team which they showed in the cup game against us. So, we know we have to step up and take everything from training onto the pitch. Work rate will be massive in this game for us, every one of us needs to put the work in and then the goals will come.”

Central midfielder Hannah Forster also said that: “In the league so far I feel we have shown our quality in spells, it’s now time for us to put in performances for the full 90 minutes and this has to start on Sunday.”