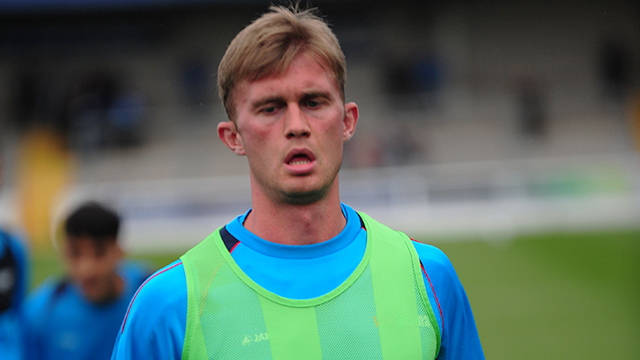 AFC Fylde captain Josh Langley is determined to defy the odds and return to action this season despite fears that the defender could miss the rest of the campaign with serious injury.

Speaking for the first time since rupturing his Anterior Cruciate Ligament last month in the 4-1 home defeat to Maidenhead United, Langley admitted his was heartbroken to receive the news but vowed to come back ‘bigger and better’ than ever.

Langley said: “I did the injury a few weeks ago and at the time I thought it was just a bit of bone bruising. The initial pain was quite bad but it eased off very quickly however a scan confirmed that I had ruptured my ACL. It was lucky in a way because it could have been my MCL which would have taken a lot longer to recover.

“We then went to see the surgeon two weeks later and I’m booked in for the 19th September for the operation.

“It felt like the worst news ever. I have worked so hard over pre-season and to get injured four games in was a huge blow.

“I’ve been at this club for three years now and I can honestly say that I’ve have given everything to help us get to where we are today. For that to be over in so soon into the season is heartbreaking.

“It’s too early days to give an exact timeframe of a return but I will do everything I can to make that as soon as possible.

“At the moment I can only really ice my knee and rest it. Every day is dragging. I have been coming in to see the lads rather than just sitting at home and it’s feeling good considering what I have done. It doesn’t feel like a big deal because I can walk on it already.

“I try to take the positives from the situation and I am going to use this time to really build myself up physically.

“Everyone has weaknesses and people may say that as a centre-half I need to be bigger. So I’m going to use this time to get in the gym and try a put around a stone on in weight.

“I want to come back bigger and better than ever.”

The Coasters picked up seven points from a possible nine in the three games following Langley’s injury before slipping to a narrow defeat at Halifax Town last time out and the Fylde captain admits it can be difficult to watch on from the sidelines.

“I think the lads have done brilliantly since my injury but watching the games is very hard for me – that’s probably the worst part about the injury.

“Sometimes I just need to get away from it. I still keep track of what’s happening and ring the lads after the game because, although it’s a bit of a cliche, I genuinely want the team to do well even when I’m not playing.

“Grandy has come in and taken my place and I wish him all the very best. I have always felt that way and I always will.

“I want to get back in the team but for now I just want to get the operation done and start climbing the mountain that I have ahead.”