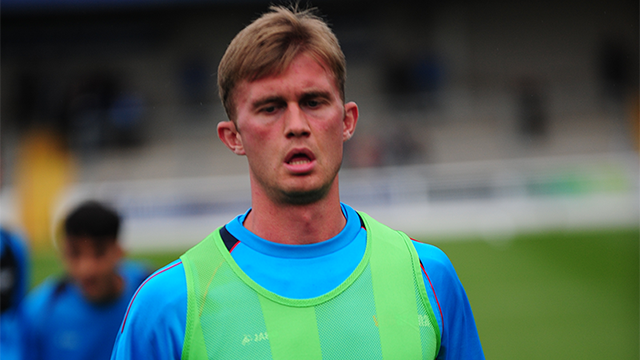 Josh spurred on by injury

AFC Fylde captain Josh Langley insists injury has inspired him to have the ‘best season of his career’ next term.

The Coasters favourite has missed the majority of the campaign with an anterior cruciate ligament injury but is raring to go after resuming full training recently.

Despite the setback, Fylde have enjoyed a phenomenal debut season in the National League and Langley believes his side are more than capable of securing a play-off spot.

Josh, how is the rehab going?

It’s all very good news. I’ve been in full contact training for about four weeks now so I really feel ready for a competitive game now. I’ve spoken to Chall and he said that he’s hoping to get me a game for Tuesday next week so that’s something I’m really looking forward to.

How much of a blow was it for you to get injured especially so early on in the season?

A lot of people have asked me this question and my answer is always that it was a nightmare. It’s difficult to put into words to be honest. You feel absolutely horrible and that’s the worst thing that’s happened in my career so far, I’d say. However, on the positive side, it’s given me the motivation to get fit for next season and have the best season of my career so far.

In your absence, the lads haven’t done too badly, sitting in the play-off positions at the moment. One of the stand-out performers has been Jordan Tunnicliffe at centre-back. What have you made of his season?

There’s no doubt that he’s been fantastic. Playing against him last year when he was at Kidderminster, I knew he was a good player and as soon as his name got mentioned here I knew it would be great for us to get him in. He’ll be a top player for the foreseeable future. He’s a great lad to have around the dressing room as well which always helps and he’s done very well this season.

Overall, despite being injured, is it crazy how quickly this season seems to have gone?

In some ways it’s been a very quick season and it’s some ways it’s been one of the longest seasons I’ve had. From a personal perspective, I’m gutted that the season is nearly over because with my recovery, I wish it was just about to begin. Looking forward, however, you could say that the summer comes at a good time for me because I’ve got time to get myself as fit and as strong as I’ve ever been. I’m so determined to use that time well and come back in good a shape.

With regards to the upcoming games against Solihull and Wrexham, how much would you argue that these are the two biggest games in the club’s history?

They’re two games of the highest level and I think a lot is being made of them. If I’m being honest, overall we’ve got ourselves into a fantastic position and if you were to ask anybody at the start of the season if you’d be happy with winning your last two games to guarantee a play off place I think everyone would have taken that. Solihull are doing well and we’re well aware of what went wrong last week for us, but it’s a massive chance and one that we’re all looking forward to.

Quite rightly you mention the next game against Solihull but is the squad braced for a potential final day play-off decider against Wrexham?

We know really that if we win one of our last two games, we will stand a great chance of being in the play-off places. We all want to finish as high in the play-offs as we possibly can but at the moment, I’d take seventh place. We are capable of beating any of the teams in the play-off places as we’ve shown throughout the season. For me, the main thing is to guarantee that we are in the mix firstly.

How proud would you be if Fylde secure a place in the play-offs?

It really would be a fantastic achievement. We all know how tough the National League is and it’s so tight every single year. I think that your first season in any league is always very difficult so to get into the play-offs in the first season ever in this division would mean it’s been a fantastic year for us.