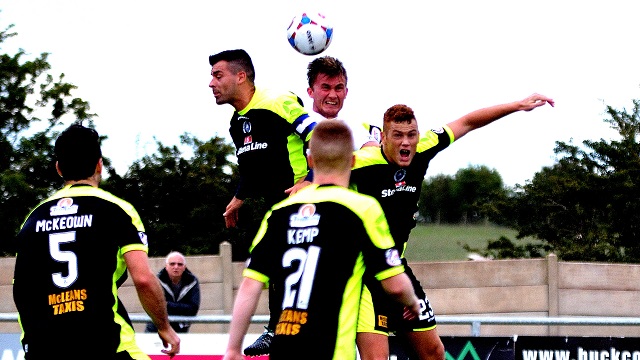 AFC Fylde star Josh Langley was pleased to get some game time under his belt in the Coasters’ opening warm up match of the campaign at the weekend.

Fylde went down 2-0 to Scottish outfit Stranraer at Kellamergh Park on Friday evening but the former Wigan Athletic man, who penned a new deal with the club last month, was just glad to be back out on the pitch.

“It was disappointing to get beat as it always is but the game was about more than the result.

“The 45 minutes we all got in our legs will do us the world of good and stand us in good stead going into tonight’s match against Rochdale.

“It has been a very hard week for us all and we did start to tire whereas Stranraer looked a bit fitter. They are a couple of games ahead of us in their preparations though.

“It was good to blow off the cobwebs and now we can look forward to another match against a League One side.”

Whilst admitting the start of pre-season has been difficult under the new full-time regime, Langley insists he wouldn’t have it any other way.

“It’s been great. I mean, what better job can you have than coming in to work and playing football every day.

“It’s been hard, there’s no doubt about that, especially all the running, but it’s what you need at this stage. Training hard like this every day should give us a huge advantage going into next season.

“We have to get fitter and make every day count and make sure we are ahead of other clubs.

“Looking around the dressing room we have some very good players now. These pre-season games are important for us to get to know each other and I’m sure we will be ready come the 6th August.”

Langley’s defensive partner Tom Hannigan left the club in the summer to join Altrincham but the centre-half is now looking forward to forming a new partnership.

“I was gutted more than anyone when Tom left. He was a great lad and a top player to play alongside.

“I haven’t played with Steve (Williams) yet so I’m looking forward to that. However there is a couple of people up for that position so it’s about who can grab their chance by working hard.”

Fylde were handed a tough start to the new Vanarama National League North season with an away trip to AFC Telford United and Langley is expecting a difficult campaign.

“There will be a big crowd and they will be right up for it. But we are in good shape and we are looking forward to it already. They are all hard game this year and the trip to Telford will be no different.

“The last two seasons we have been beaten in the play-offs so as far as I’m concerned we have to win the league this time around.”