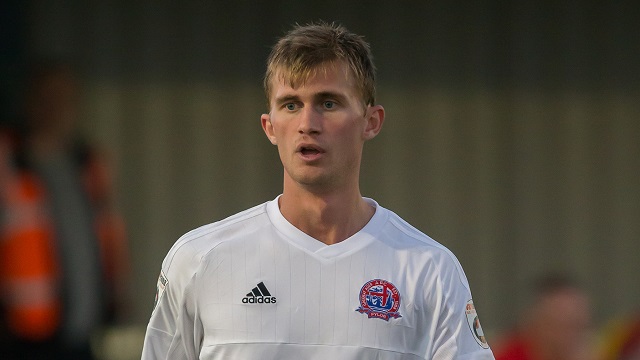 AFC Fylde defender Josh Langley is hoping to bring some of the Roberto Martinez flair to the Fylde Coast.

The Coasters line up against Millwall in the FA Cup on Saturday and Langley is well versed at playing at a higher level, having learnt his trade under the stewardship of the Spaniard at Wigan Athletic.

Langley, who has missed much of the season so far with a broken metatarsal, spent four years as a professional with the Latics during their Premier League glory days prior to joining Fylde last summer.

Now nearing full fitness, last season’s Player of the Year admits there are similarities to how his former manager and current boss Dave Challinor like to play.

Langley said: “I did my scholarship and four years as a professional at Wigan, which was a great experience. They were in the Premier League at the time and working with Roberto Martinez was fantastic. He had a big impact on my career and I learnt a lot from him.

“The way Martinez liked to play is very similar to how the manager here likes to play. Keeping the ball down and playing out from the back. Hopefully I have brought some of what I learnt there with me.

“I was predominantly in the reserve team at Wigan, but I went on pre-season tours with the first team and travelled to a few games with them. I just never really got given my chance to play.

“I decided I needed to leave and look elsewhere and Fylde was the perfect fit for me.”

The 23-year-old enjoyed a sensational first season at Kellamergh Park, but was dealt a cruel blow just four games in to this campaign when he fractured his metatarsal.

However, after months of gruelling hard work and recovery, Langley is back in full training and raring to go.

“It’s been nearly three months now since I did my injury and it’s felt like a very long time. I broke my third metatarsal, but it wasn’t a straight forward break. It’s called a spiral fracture and it takes longer to heal than usual. So it’s been a bit of a nightmare, but hopefully I’m coming to the end of it now.

“I started training last week and I will train all this week, I just need a few games now to be back in contention.

“It’s feeling good now. My ankle is still a bit stiff, but that will improve with training and games.

“I went to St Georges Park a couple of weeks ago for five days which really helped. I’ve also been going to the gym morning and night for three months. It’s been hard work, but hopefully when I’m back fit it will be all worth it.

“The team have made it a bit easier for me by doing so well at the moment. I’m still desperate to be a part of it, but if the team was getting beaten every week then it would more difficult and I would want to get out there and help.

“Last season was good for me. As a team we let it slip, but personally it was great for me to pick up the Player of the Year award. However, I swap that any time to be in the National League.

“Dom (Collins) and Tom (Hannigan) are doing very well at the back, so it will be hard for me to get back in the team. I just need to keep working hard and take my chance if and when it comes.

“I’m not sure if this weekend may be a game too soon. Ideally I would have liked a couple of games under my belt before this one, but I’ll leave that up to the manager.

“I think this one at Millwall is even bigger than last season’s game at Plymouth. They are a league above and the standard of players will be higher. Having said that, it could work in our favour. We go there as underdogs and all the pressure is on them to beat us.

“The way we are playing I’m sure we can go to Millwall and give them a real game. We know it will be tough – they are doing very well in the league at the moment – but Warrington surprised a lot of people last year and I think we are a better team than them so there’s no reason we can’t go there and cause a shock. Stranger things have happened.”