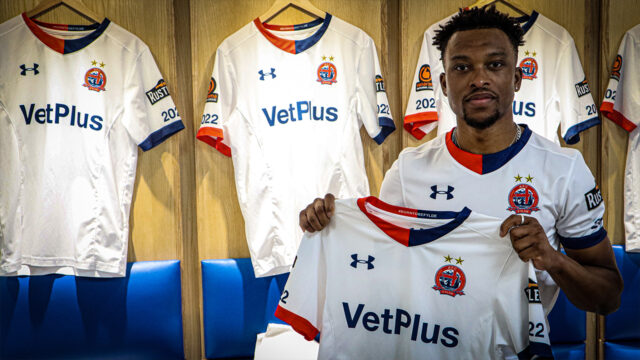 AFC Fylde are delighted to announce the signing of Jorome Slew on a 28-day loan from National League South side Hampton & Richmond Borough.

Slew, who originates from Sheffield, joins the Coasters on a short-term deal and will link up with Jim Bentley’s side ahead of today’s fixture against Curzon Ashton.

After beginning his career at Sheffield United Academy, the 24-year-old had spells at North Ferriby and Chester before signing for Maldon & Tiptree, where he caught the eye of many, scoring over 30 goals in the 2019/20 season.

A player who possesses real speed, Slew is known for scoring a superb solo goal in the FA Cup First Round against Leyton Orient for the Essex based side.

The forward’s latest stint at Hampton & Richmond Borough has seen him notch six goals in 19 games, and he now makes the move back North, looking to hit the ground running in a Coasters shirt.

On the arrival of Jorome, manager Jim Bentley said: “Jorome has a good pedigree and has scored a few goals this season in the National League South.

“We have been searching for a striker or two, and this is a good opportunity for us to look at Jorome’s capabilities – hopefully, he will get a few goals for us.

“He’s played the last few seasons down south, but he is northern-based and has commitments up here, so this deal works well.

“Jorome had a fantastic season not so long ago at Maldon & Tiptree, he’s at a good age and has good potential. We hope it’s a successful loan move for both parties.”