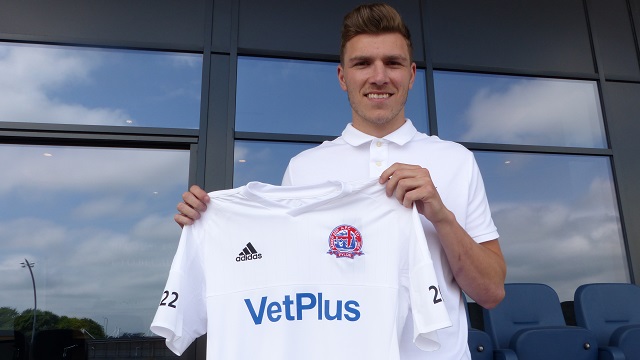 The 23-year-old defender becomes Dave Challinor’s first signing of the summer after putting pen to paper on a two year deal and is now eagerly-anticipating a new challenge.

Former West Bromwich Albion youth product Tunnicliffe said: “The deal has happened quite quickly really. I got wind of the interest earlier in the week and it’s something that interested me straight away. I didn’t have much thinking to do about it to be honest.

“The club continues to move in the right direction and I am doing the same on a personal level so it’s the perfect place for me to be.

“Both games against Fylde last season were very enjoyable to play in and everyone I spoke to afterwards said they were great games to watch too.

“They are two teams that like to play football and both results were probably fair results with two draws between the best two sides in the league last season.

“It has been my aim to join Fylde for a while now having watched them progress through the leagues. Of course, promotion helped my decision a little bit because the National League is where I want to play and where I want to test myself.

“I’ve played in the National League for a couple of years with Kidderminster so I know what it brings, but I know I can deal with it and hopefully I will add something to the team here. Now I’m just really looking forward to the challenge ahead.

“I’m a centre-half that likes to get on the ball but at the same time I like to do the ugly side of the game too. I’m good in the air and like to get stuck in.

“You have to have goals and targets when you come in to a new team and when you start a new season. As a club the aim is to finish as high as possible in the league table and on a personal level I just want to be involved in that as much as I can.”