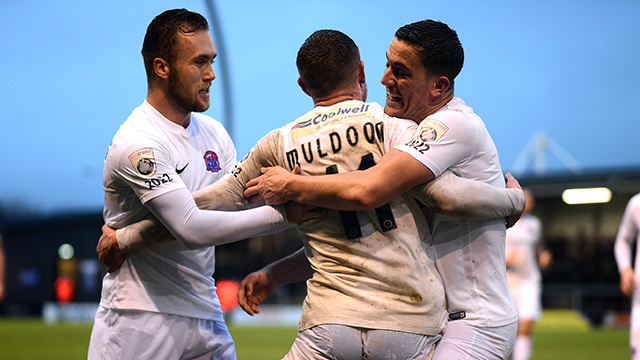 AFC Fylde full-back Jordan Richards was ‘over the moon’ after his side demolished promotion hopefuls Tranmere Rovers on New Year’s Day.

The Coasters sent shockwaves around the National League with a 5-2 victory over Micky Mellon’s side, who had only conceded five goals in their previous eight outings.

The convincing victory came on the back of a gritty 2-1 win at Maidenhead United two days earlier and Richards, signed in the summer from Hartlepool United, admits the squad are buzzing after a dream start to the New Year.

Richards said: “We are over the moon with the result. It’s tough playing two games in three days but I think we owed Tranmere one from Boxing Day when they beat us.

“All the lads are buzzing after a great weekend on the whole and we are really pushing up the table now.

“We were all a little tired on Monday but every single player gave it everything they had and pushed themselves to the limit. Because of that we got what we deserved out of the game.

“I definitely think the play-offs are a realistic target. Why not? The league is still extremely tight and even when we win we don’t seem to move up many places but the points remain very close.

“However, with our games in hand, if we can pick up six points then I’m sure we will continue to creep up the league.

“As the gaffer said in the changing rooms after the game, there are 21 points to play for in January. We have checked off the first three and if we keep doing that then we could be right up there.”

With tough competition at right-back alongside Luke Burke and Josh Ezewele, Richards struggled for game time earlier in the season, however following a string of impressive performances, the 24-year-old has become a mainstay Dave Challinor’s plans.

“I’m really happy on a personal level,” added Richards. “I do everything that I can to improve myself and I want to be playing every week.

“I’ve got my chance now and I will keep working hard to make sure I stay in the team. Hopefully performances on a personal and collective level will continue to bring results.”

The Coasters travel to Bromley on Saturday hoping to make it three wins on the spin and Richards says the squad are ready: “It’s tough on a 3G pitch but we will be recovered and ready to go again this weekend.”