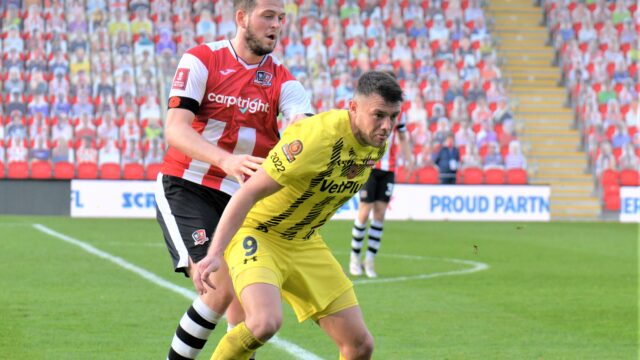 Jordan Hulme: “My first touch in training was horrendous, so I was worried the lads weren’t having me!”

In-form centre-forward, Jordan Hulme, has enjoyed a productive start to life at Mill Farm, as he bagged his third goal in an AFC Fylde shirt on Saturday afternoon.

The goal put The Coasters in the driver’s seat against Exeter City, but unfortunately, it wasn’t enough to seal the win, as the Grecians went on to win 2-1 and progress through to the second round of the Emirates FA Cup.

Hulme told afcfylde.co.uk, that he is still disappointed with how the game went. He said, “It’s always nice to score, but I’m still gutted that we didn’t win the game.

“I’m a winner, along with all the lads in the dressing room and the gaffer, so when you score but you lose the game, it doesn’t really mean anything.

The striker arrived from Altrincham at the start of October, after scoring 70 goals in 139 games, and has hailed his new teammates for helping him make the transition to full-time football:

“It’s been easy to settle in to be fair, and that is all down to the group in there [the changing room].

“It’s always daunting coming into a new club, especially a full-time club where everything is about results; about winning; about training every day to prepare for the next game. I haven’t experienced that before, so I wasn’t used to it at first.

“It’s a big change, but I think it’s helped a little bit that I’ve come in and scored a few goals to take some pressure off.

“My first touch in training was horrendous so I was worried the lads weren’t having me!

“There’s really good competition for places at the club. It was just me and Kurt [Willoughby] to begin with and then I saw on Twitter that we’d signed another striker!

“On a serious note, Sammo [Jack Sampson] has come in and he’s a great lad, so it’s good for all three of us to have that competition. There’s never any bad feelings when one of us is picked because at the end of the day we are all pushing for the same thing, so we wish each other well.”

The Coasters host Spennymoor Town tomorrow night in the National League North. Spennymoor are a team that Jordan knows well, having faced them many times during his time at Alty, and he isn’t expecting an easy game.

Hulme said, “I know Spennymoor really well from all the times I came across them in the past. They’re a good team; they’re always tough to play against.

“They’ve probably got one of the best strikers in the non-league scene in Glen Taylor. I have warned Whitts, Sampson and Pondy about him, so they are all prepared.

“It will be a tough game as always – we know that, but the way we are playing at the moment, we are confident.