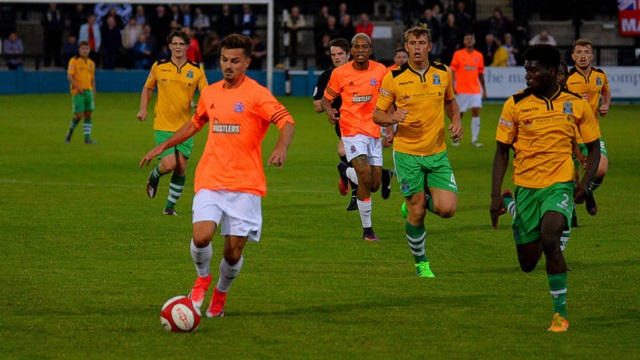 AFC Fylde new boy Henry Jones was delighted to make the dream start to his Coasters career with a stunning goal in the 5-0 friendly win over Marine.

Midfield star Jones made the switch from Bangor City last month after setting the Welsh Premier League alight, bagging 14 goals on his way to winning the league’s Young Player of the Year award.

The 23-year-old put the icing on the cake with the fifth goal earlier in the week during Fylde’s opening warm-up match and admits he ‘loved every minute’ of his first Coasters appearance.

Jones said: “I just felt like I caught it very sweetly. It was the sweetest that I’ve caught a shot in a long time and luckily for me it flew right into the top corner so I was really, really happy with that.

“It was only my first 45 minutes but I loved every minute of it. We all want to play right way here. The manager wants us to play good attacking football and that really suits the way that I like to play. We want to use the ball, we want to move the ball and we have the players to be able to do that.

“We used the ball a lot especially as the game wore on. We moved the ball really well and created a lot of opportunities. We could have scored three or four more in all honesty.

“I’ve been here for two weeks now and it’s been very intense. It’s been hard to be fair but the manager has worked us really hard and I think we will benefit from that as the season goes on. There are a lot of games in this league and we need to be as fit as we can.

“Danny Rowe scored a lot of goals last season and it was great to see him continue that with another two on Tuesday night. I’m sure he’ll score a lot of goals this season as well and hopefully I can chip in with a few assists for him.

“I’m really looking forward to playing at Mill Farm over the next few weeks. It’s a fantastic stadium with a really good pitch and hopefully we can have some good performances before the season starts next month.

“We’re playing against some really top teams – Rochdale, Bolton, Morecambe – and they’ll all give us a good idea of the quality of the football league.

“I’m really looking forward to next season now. There’s a lot of games but that’s what we want as players. I’m looking forward to coming up against big teams that I’ve never faced before and I want to show everyone what I can do.”