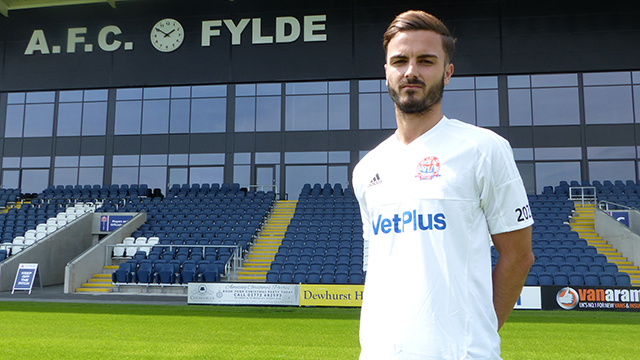 Jones was the stand-out player in the WPL as his club Bangor City secured a Europa League spot, but the starlet turned down European football next season in favour of a move to the Coasters.

The 23-year-old midfielder has attracted interest from far and wide after scoring 14 goals last season on his way to being named the Welsh League’s Young Player of the Year.

However, the former Wales Under-21 international admits the opportunity to join the Coasters in the National League was too good to turn down.

Jones said: “The move came out of the blue for me. I knew there was interest from clubs because I had enjoyed a good season and there was a lot of talk, but this one stood out to me.

“It has all moved pretty quickly since the initial contact was made. I had been hoping earn a move and this suited me down to the ground.

“The stadium is great, the facilities are really good and the club is definitely on the up. The ambition matches my own because I want to work my way up to the top. I feel like this is the right club for me.

“The facilities here are like a League One club at the very least. Everything is set up to keep moving in the right direction.

“I fully expect us to compete at the right end of the table. I think we have every chance of competing right at the top of the league. We will certainly give it a real good go.

“There has been a lot of talk about the club recently and people are starting to sit up and take notice because of the way we have recruited this summer.

“Expectations will be high from the outside too but I don’t see any reason why we can’t live up to that and challenge.”

Jones was scouted by Premier League side Swansea City at a young age and spent 14 years progressing through the ranks before moving to Bangor last summer.

Officials at the Welsh Premier League admitted that the Coasters had picked up their best player and Jones hopes to replicate his electric form over here in England.

“I was picked up by Swansea when I was eight and played right the way through before becoming a scholar at 16 and a pro at 18. I was a pro there for four years but I got a little bit stuck in the Under-21s and felt like it was the right time to leave to play some games.

“I went to the Welsh Premier League and played there for a year with Bangor. It was great because I played every game and scored a lot of goals.

“The standard of football was a lot better than I thought it would be so it was a very positive spell.

Speaking of his favoured position, Jones said: “I like to play in the hole behind the striker or out wide. I try to be as creative as possible, whether that be with goals or assists.

“I can play deeper too but I prefer to be further up the pitch where I can make a real impact.”