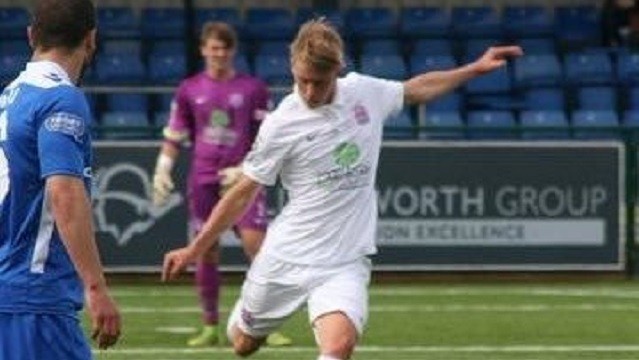 Academy star Joe Gregory is the latest of this year’s cohort to get the opportunity to trial at a Football League club, with Barnsley keen to take on the youngster.

Joe will travel to Barnsley today and train with the League One club for the week with the hope of doing enough to earn an offer. He becomes the most recent of the Academy squad to be given a chance alongside full-time players and everyone at the club wishes him the best of luck.

Joe follows in the footsteps of Josh Kay who signed a professional contract with the Tykes back in January and becomes the third player from the Academy in the last six months to attract attention from Football League clubs after Carnan Dawson attended both Blackburn Rovers and Stoke City training session earlier in the season.

The Academy programme has been a real success and they have just completed their first season in the Football Conference Youth Alliance, competing extremely well and finishing in a respectable 5th place in the table having won nine of their twenty two league games this season. The achievement is even more remarkable as the team play in an under-19 league and the majority of the squad is made up from first years (U17’s).

Manager Dave Challinor, who also coaches and manages the youngsters, said: “It’s been a tough but very rewarding first season in this division. The lads have had to grow up really quickly and been tested physically as much as anything else.

“It’s a steep learning curve for them but hopefully will stand them in good stead and help us next season. The final game last Wednesday away at the champions Gateshead showed me an awful lot. We lost the game 2-0 and were under the cosh for most of the game but the lads really dug in and defended for their lives.

“With a team comprised of all 16 and 17 year olds, we held out for nearly an hour against a team that only dropped five points all season. The other pleasing point about that is that we were one of the two teams that took points off them earlier in the season with a 2-2 draw at Kellamergh Park. We’ve shown that even with a team two years younger than most that we can compete.

“Next season we’ll recruit between 20-30 first years and hopefully many of them will develop and progress and earn the opportunities like Josh, Joe and Carnan have done this season.”

The Academy is based at Blackpool and The Fylde College where students gain an outstanding education as well as developing their football skills.

Joe’s tutor, Mark Westhead, commented, “This is an excellent opportunity for Joe. It is important that our students always have their academic qualifications for when their football career is over. We will continue to work with Joe to ensure he gets the best education whilst pursuing his goal of become a professional player.”

The college is now taking applications for September starts, not only for The Academy, but for all its level 2 and level 3 courses. Click here for more information.