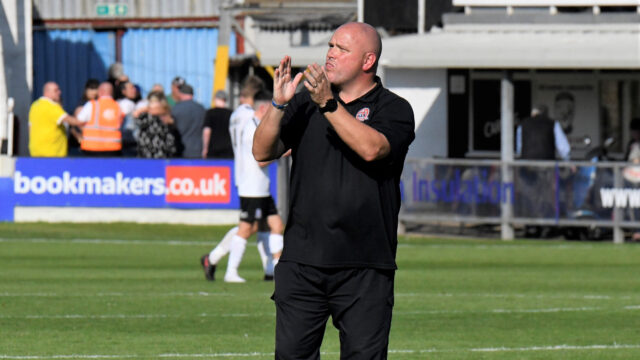 The Coasters secured a valuable point on the road against Alfreton Town in the National League North after an Ethan Walker strike cancelled out Bailey Hobson’s earlier goal.

After seeing the Coasters roll their sleeves up and battle for a point, Jim Bentley reflected on his side’s performance.

“We went with three at the back today,” Bentley said. “We’ve worked on certain things, and bits of it were good today. I think in the first half at times, we dominated the ball and created some good opportunities.

“On the other hand, Chris Neal has made an unbelievable save down to his right in the first five minutes, but we’ve had opportunities, we controlled the game, and on that reflection in the first half, we were the better side.

“Then we were thinking it was going to be more of the same, and we would kick on. The first five minutes were ok, but then they’ve built the momentum, and balls are going into the box – it was all hands to the pump.

“The goal was a bizarre one to concede where we’ve got three or four opportunities to clear it, and then they go and score.”

Moments after Alfreton scored the opener, Bentley started looking towards his bench for someone to make a difference, and he found one in Ethan Walker, who he praised for his contribution.

“As you want with your subs, you want them to come on and affect the game. Stephen Dobbie did it against Kidderminster, Ethan has done it today, and I’m really pleased for him.

“He hasn’t really got going yet because he had a bit of an injury that cost him a position in the squad against Kidderminster. He’s then come in today off the bench and scored a good goal for us.”

Overall, the point keeps the Coasters unbeaten, and despite a tough afternoon against Alfreton, Bentley is happy with a draw.

“The last 15 minutes was end-to-end football, and then with the last kick of the game, they broke on us, and we had to call on Chris Neal to make a good 1-v-1 save, so we’re a little bit lucky to come away with a point.

“Credit to Alfreton, though. I know Billy Heath very well, and he gets his side going with how they play. They’re a tough outfit with some good players in there, but we’re pleased to come away with a point, and we’re still unbeaten.”