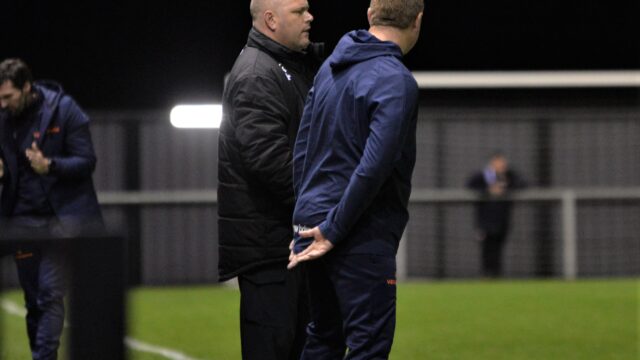 The Coasters travel to Curzon Ashton on Tuesday evening (7.45 pm KO) as they look to defend their unbeaten record which has seen them rise to second in the National League North table.

But Jim Bentley insisted that his team must stand up against a team who will have gained confidence from their hard-earned victory at the weekend.

Telling afcfylde.co.uk, the manager said: “They have some very capable players, and got a really good three points against Kettering Town on Saturday in tough conditions. We are expecting a really tough game.

“They will be back at home on a much better pitch and will be looking to build on the positive result at the weekend.

“We have had to adapt because on Saturday we prepared for the Boston game and then got the late call that it would be postponed. Both teams play completely different; for starters, they [Curzon Ashton] play in a different formation and have a different playing philosophy, so we’ve had to change our match preparation pretty quickly.

“We know that we will have to go there and mix it up a bit. We can play, everybody is aware of that, but it will be important that we battle and defend the box well. We’ve proven that we can do that up until now. In the games where we’ve needed to stand up and be counted, we’ve done that so we will need to do that again tomorrow night.”

AFC Fylde saw their game against fellow high-flyers, Boston United, called off on Saturday morning, following a Boston United player testing positive for Covid-19. The regulations now place Boston United into a 14-day isolation period. For Bentley, though, he was disappointed not to get out there and build on the momentum.

Bentley confessed: “We were looking forward to a game on Saturday, so we were a little disappointed.

“I think this is going to be the way that the league is going to pan out for everyone with lockdowns and isolated Covid issues, so what you have to do is look for the positives.

“We’ve been carrying a few niggles from the sheer amount of games that we’ve had to play in such a short space of time; we’ve had Jordan Hulme who’s been carrying a bit of a groin injury; we’ve had a few players that have been running on empty; we’ve got Nathan Pond who has had an issue recently and we were concerned about the Saturday/Tuesday schedule for him. So, what we’ve done is make the best of the situation by topping the lads up on Saturday with an in-house game, and managed the ones that we needed to manage.

“We are hoping that it won’t have too much of an effect on the momentum of winning games, and we can get back to it on Tuesday night.”

The one thing that has been evident this season, is the manager’s faith in the entire squad – often changing a winning side and handing out opportunities to the players on the fringes.

“We are in so much uncertainty. It’s not as if we have got to the end of the season, had a couple of months off, returned for pre-season and it’s all been plain sailing. We’ve had six months without a game, a disrupted pre-season and I think a good example is the Premier League statistics that show a 70% increase in muscular injuries already.

“I think it’s important that we mix things up, keep things fresh and also pick teams to execute the game plan that we want.

“In the past, I’ve stuck with winning teams and I have changed them; I think we saw in the Darlington game how it worked with Nick coming off the bench to score the winner.

“We are in there thinking about team selection now. We pretty much have the starting eleven nailed down but we’re having problems with the bench. Do we stick a goalkeeper on? etc, so we are always thinking.”