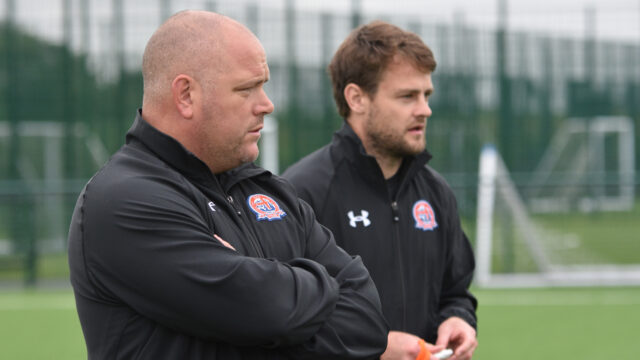 AFC Fylde manager, Jim Bentley discussed how pre-season is going so far for his side following the Longridge Town friendly at the weekend.

“The biggest thing is that we’ve picked up no injuries to the players,” Bentley stated, following the conclusion of the match.

He continued: “We’re a little bit mix and match at the minute with regards to trialists, as well as young lads and senior lads. Credit where credit is due, Longridge came here and set up well, played some good football and scored a fantastic goal.

“With regards to ourselves, I was a bit disappointed with some of our play and then really pleased with some of the other bits, so it was a mixed bag. We’re a work in progress, we need a few bodies in to help us and we’re working on that all the time, we’ve also got a couple of injuries as well.

“It’s nice for the boys to have got a win but pre-season isn’t anything to get too excited or down about, we don’t get too high or too low whatever happens, it’s about working on things and learning more about players.”

Bentley then gave his thoughts about how the pre-season has gone as a whole so far, with his side having played four fixtures now.

He said: “I think we were pleased with the first couple of weeks, the way things were working and the way we were going about our business in training and in the games.

“We just think the last week or so that performance wise in the two games [Squires Gate & Longridge] hasn’t been at the level we expect. There’s a lot of things to take into consideration, that we’ve had a couple of injuries and a lot of trialists. Not major injuries, but a few little niggles here and there which isn’t ideal.”

On finalising his squad for the start of the season, Bentley said he was happy with the players that have been brought into the club but feels that they still need more to come in and compete.

“We need to get a few more bodies in and we are tracking players all the time. We’ve missed out on a few like any other club, but we are light on numbers so we need a few more to get us where we want to be.

“This is now a new week and it is important we up the levels and start getting ready for the start of the season, we know we’ve got a bit of work to do but we’re happy with the players we’ve got in and naturally, when some more come in and the injuries come back, it will start coming together.”