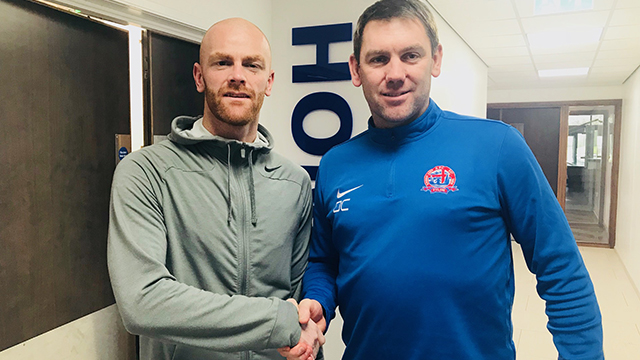 AFC Fylde midfielder Jason Taylor has extended his deal with the club until the end of the season.

The 30-year-old joined the Coasters in October on a three-month contract and has impressed during his 12 appearances for Dave Challinor’s side.

Having started his career with Oldham Athletic, Taylor has spent the majority of his career in the Football League, featuring for Rotherham United, Cheltenham Town and Northampton Town.

He departed Northampton last summer before joining National League side Eastleigh where he was a regular during the 2016-17 season.

The tough-tackler was delighted to stay on at Mill Farm: “I’m really pleased to be here until the end of the season. It been very successful spell so far. I have been playing games and the team is doing very well so overall I’m very happy.

“My intention was always to come in, do well and hopefully earn a new deal. I needed to get games under my belt and I managed to do that and I’ve been rewarded with a new contract.

“I came out of the team a couple of weeks ago but the lads have done very well since so I have to be patient. Hopefully I will get my chance again and then it’s up to me to nail down a place in the team.

“As a team, I think if we can keep within touching distance of the play-offs then we have a great chance of breaking in. The league is wide open and this month presents a big opportunity to keep pace with the teams at the top.

“These games in hand are massive for us as we catch up on other teams. We want to keep the pressure on and let everyone know that we mean business.”