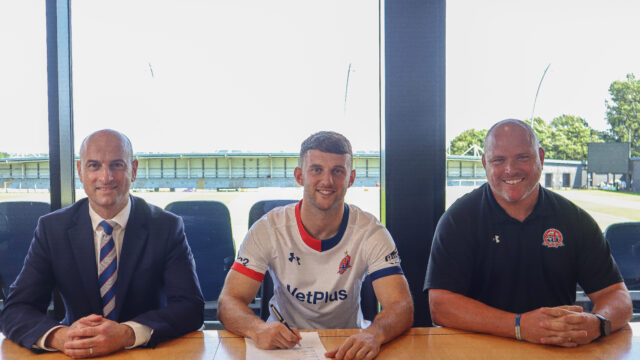 AFC Fylde are delighted to announce the signing of defender Jamie Stott on a loan deal from Stockport County.

The 23-year-old joins The Coasters on a season-long loan from National League outfit Stockport County, with the option of a recall in January.

Stott, a left-sided centre back, is Jim Bentley’s fifth summer signing and arrives with an abundance of experience at National League North level and higher.

The former Oldham Athletic defender stood out during his time on loan at Edgeley Park, where he racked up a total of 48 appearances during their National League North championship-winning campaign, and picked up the Young Player of the Year award at the end of that season. He made a permanent move to County in the summer of 2020 and played 17 times last season.

On the signing, Jim Bentley told afcfylde.co.uk: ” We are really pleased to have Jamie in the building. He is someone that has been on our radar for some time, and we feel that his qualities suit the way that we want to play.

“He has experienced a title-winning season at this level with Stockport, so has a good understanding of what it takes to get out of this divison. Those are the types of characters that we want at this football club.

“Not only that, he is a left-footed centre back, which are hard to come by at this level. He is a good character and professional, knows the club already from his previous loan spell and although he has had interest from National League clubs, we are pleased that he has decided to play for us.

“I’d like to thank Stockport County for allowing Jamie to join us and I have no doubt that he will be a success during his time here.”