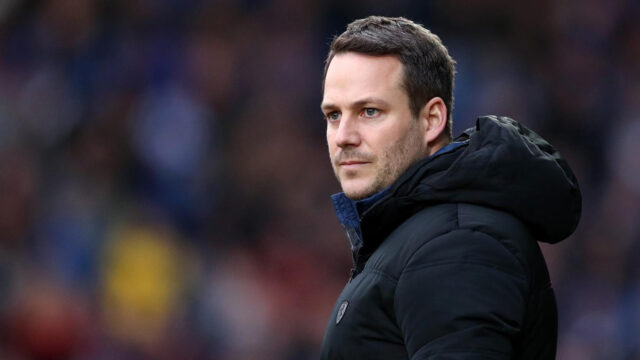 AFC Fylde are delighted to announce the appointment of James Rowe as first-team manager on a three-year deal until June 2025.

James arrives at Fylde on the back of his most recent stint at Chesterfield, but he first started his career in management in June 2016 as assistant to Gary Waddock at Aldershot Town, where they reached the National League playoffs in successive years

Rowe struck out on his own when he accepted the mangers job at Gloucester City for the start of the 20/21 season. Gloucester were soon top of the league, and it was those performances that earned him a move to Chesterfield, who were in the National League relegation zone at the time.

In a very short time, James transformed them from relegation candidates into promotion contenders before losing out in the playoffs to Notts County. The 21/22 season continued in the same vein, and Chesterfield were top of the League when James departed.

On the appointment of Rowe, chairman David Haythornthwaite said: “James is a manager who has been on our radar for some time as his results at both Gloucester and Chesterfield were outstanding.

“Over the last four days, we have had several meetings with James both face to face, and in my case, as I am away on business, over TEAMS. We have all been struck by James’s openness, burning ambition and desire to win.

“We have done our due diligence on James, and while it is clear he is no shrinking violet, we are confident that James will bring winning mentality to the Club, which we all want.

“Perhaps most significantly, James came highly recommended by Fylde legend Danny Rowe, who James bought to Chesterfield from Bradford City at the start of this season.

“With Danny being sidelined due to a long-term injury, we had invited Danny and his father to the Boardroom back in December, and obviously, the conversation turned to football and what it was like at Chesterfield playing under James.

“I remember Danny’s comments that day: ‘He may not be everyone’s cup of tea, but he’s a winner and the best Manager I’ve played under.’

“Knowing Danny and the character he is, recommendations don’t get much better than that!

“At the same time, we are sad to announce the departure of Nick Chadwick, who we knew also wanted to be considered for the job.

“However, as part of our negotiations, James felt he needed a clean sheet of paper, and we respected this decision. I want to put on record my sincere thanks to Nick, who like Jim Bentley, is a true gentleman and someone we wish every success to in the future.”

“James will meet up with the team tomorrow and take his first training session in preparation for the game at Kidderminster this Saturday.”

On arriving at Mill Farm as the new Coasters boss, James Rowe said: “I’m delighted to be here at the Club, and I’m looking forward to getting started and getting integrated within the community, and with that in mind, me and my family moving to the area to help with that.

“All focus is on the short-term objective of returning to the Vanarama National League, whilst also implementing the foundations for the long-term success.

“I look forward to seeing the travelling support at Kidderminster on Saturday, but if not then, I will look forward to introducing myself at the Telford United fixture next Tuesday night.”

A full interview with James will be published on the Club’s official channels in the coming days.