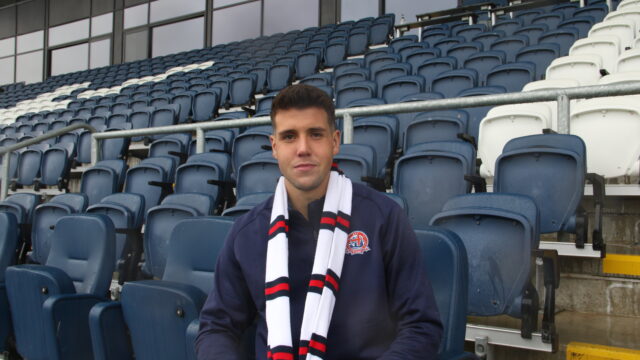 AFC Fylde are delighted to announce that Jack Sanders has joined the club from Wigan Athletic, on an initial loan deal until mid-January.

The towering 6’4 centre-back began his footballing journey in non-league, turning out for Charnock Richard and Leek Town, before earning a move to Wigan Athletic in 2018.

Sanders, 22, has featured heavily for the Latics Under 23’s since arriving at the DW Stadium, while also gaining valuable experience during loan spells at Blyth Spartans and Southport last season.

Nick Chadwick, who also made the switch from Wigan Athletic in July, expressed his delight at working with Jack once again. Chadwick was highly influential in bringing the young defender to Wigan two years ago and believes he has certain characteristics that the manager looks for in a player.

Speaking to afcfylde.co.uk, Chadwick said: “ We are really pleased to be able to get Jack in. He’s a commanding centre back and somebody who enjoys defending, which is something that is really important to us.

“When he came in at Wigan he was highly coveted, with lots of clubs looking at him. During my time, I think myself and the rest of the coaching staff polished him up a bit in terms of technique. He is a proper centre half; a defender that likes to defend. He knows his game and knows what he is good at.

“Like all of the other players here, he’s always looking to improve his game, so I think he will fit in really well with the group. We are all really looking forward to working with him and seeing how he develops during his time here.”

Jack will be available to feature in tomorrow’s National League North fixture against Kettering Town.

Everybody would like to wish our latest recruit a very warm welcome – @jack_sanders123.