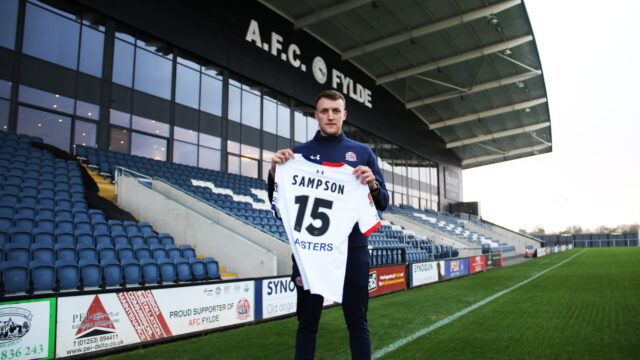 AFC Fylde are delighted to announce the signing of Jack Sampson from Southport for an undisclosed fee.

The 27-year-old joins The Coasters on a one-year deal, with an option of a further year in the club’s favour.

The move to Mill Farm comes off the back of four productive years at Southport. Sampson is a player that Jim Bentley knows well, having played 65 games for Morecambe from 2013-15 under his management.

Jack will be available for selection in tonight’s National League North fixture against Kettering Town, and will wear the number 15 shirt this season.

After putting pen to paper, he told afcfylde.co.uk: “I’d been at Southport for a while, building a reputation there as a big target-man. I know a lot about this league now so feel I can hit the ground running in that sense.

“I have worked under Jim [Bentley} before at Morecambe, he’s a great manager and when I found out about the interest – such a big club like Fylde – it was a no-brainer really. Obviously the lads have had a great start to the season and I’m just looking forward to getting involved now. The interest has been there for some time and it’s probably took a bit longer to get over the line than I first though, but we’re there now.”

The highly-rated centre-forward will go straight into tonight’s squad against Kettering Town, and will be competing for the striker spot along with Kurt Willloughby and Jordan Hulme. The competition for places, though, is something that Sampson sees as a positive.

“If we’re going to achieve anything this season then you need that competition. I know a lot about both of them [Kurt Willoughby and Jordan Hulme] but I’d say that I’m a bit different; I’ve got different attributes. I think they are both top players, so I’m looking forward to working with them.

“The players and staff here have all got a winning mentality, so it will be great to come into that. They are the best places to be. We, myself included, are all going to play our best football when we are winning games and are confident, so long may that continue.

“It will be a bit strange tonight because they won’t really know me yet, I haven’t trained with them but it’s probably the best way to do it. Hopefully I can get some minutes tonight against Kettering. Whatever ‘Chaddy’ goes with, I’ll be ready.”