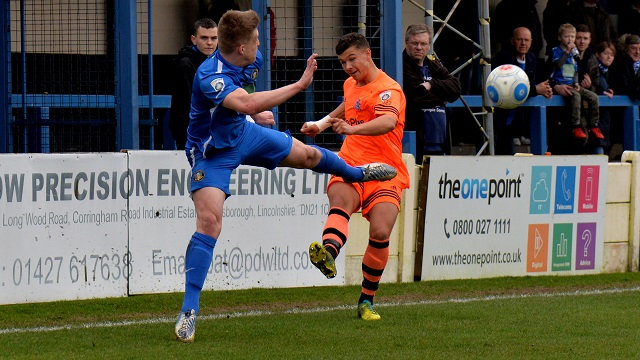 Coasters full-back Macauley Wilson could miss the rest of the season with a knee injury.

The 19-year-old, on loan from Blackpool, picked up the injury during the first half of last weekend’s victory at Gainsborough Trinity.

New signing David Morgan suffered a similar injury on Saturday, and whilst his injury is thought to be less serious, the midfielder could miss out this weekend.

However, Fylde have been boosted by the news that playmaker James Hardy is on the verge of a first-team return.

Manager Dave Challinor said: “We are looking at four to six weeks with Macauley which probably rules him out for the rest of the campaign. He has been to see Blackpool’s physio too so we will wait and see on his situation now.

“James has done some running this week and we will probably introduce some ball work tomorrow. He might be involved in full training on Friday but this weekend could possibly be too soon. He could potentially be on the bench but we will see how the rest of the week goes before making a decision. It will be a big boost to have him back.

Meanwhile, Dan Jones has returned to Grimsby Town after his loan deal expired.

Challinor added: “We went into that deal with our eyes open and we knew the situation. He needed some game time and as much as we would have liked to keep hold of him, he has made the decision that he wants to fight for his place at Grimsby.

“He is very much a part of their plans and wants to force his way into the team ahead of next season.”