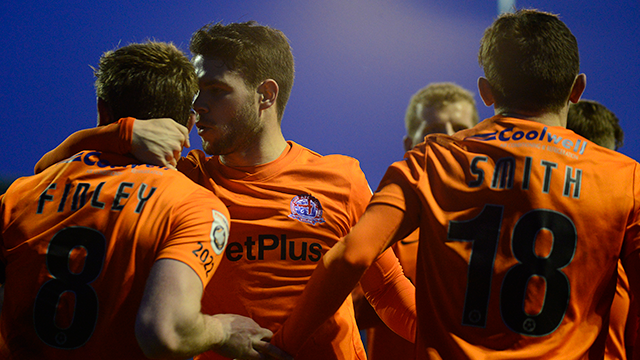 “In our own hands” – Challinor

Manager Dave Challinor was delighted that last night’s victory at Barrow has put the Coasters destiny in their own hands.

The 3-1 victory at Holker Street lifted AFC Fylde back into the National League play-off places with just five games to go and Challinor was impressed with the away day display.

Challinor said: “The victory has put us in a very good position and it’s now in our own hands. If we win every game between now and the end of the season then we will be in those play-off positions.

“That’s two really good results over the Bank Holiday. Results went our way but it was important that we looked after ourselves too.

“If we do get into the play-offs then we are likely to have three away games so our away form had to improve and last night was very pleasing.

“We went there knowing that Barrow have struggled at home but it was never going to be easy. Like the display against Halifax, it was by no means vintage but we found a way to win.

“There was still plenty of room for improvement but it’s much better to learn on the back of three points.

“We were under pressure throughout but we managed the final stages of the game very well and kept their opportunities to a minimum. Then to go and nick another with the final kick of the game perhaps made it look more comfortable than it was.

“I was particularly pleased with the opening goal because we had set up hoping for something along those lines. We kept Jonny up there for corners and he has won a challenge on the halfway line and raced through to score.

“The other two goals were also pleasing because Rowey’s came at a good time when we were under pressure. Then the third, with everyone screaming for Tugay to take it to the corner, he goes through and scores so that will do him the world of good.”