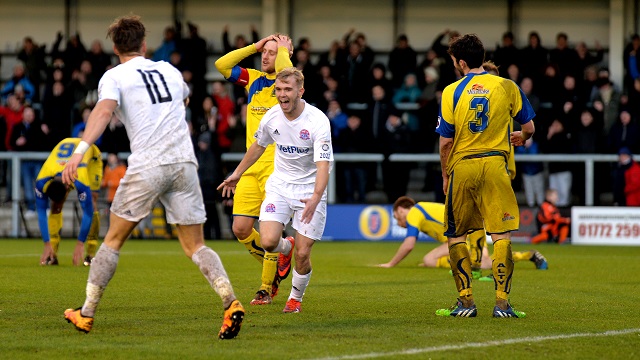 AFC Fylde manager Dave Challinor admits it was key for his title-chasers to pick up six points from the last two home games.

The Coasters bounced back from defeat at Curzon Ashton with back-to-back home victories over Alfreton Town and Altrincham in the space of five days.

Challinor said: “It was massively important to get two home wins in the last few days, especially after losing last Saturday. Am I overly happy with the manner of the two performances? No because I think we can be a lot better but at the end of the day it’s two wins.

“I’d have taken that before the game on Tuesday, we just needed the six points and we’ve done that. I’ll be critical and try to be a perfectionist and ask a bit more of them but they’ve done exactly what we needed.

“I’d rather we didn’t concede in the last minute of the first half because that then makes a bit of a game of it. If someone came here not knowing who was top and who was bottom, there wasn’t much in the game.

“Once Rowey chops onto his wrong foot and sticks it in from 25 yards, you’re maybe thinking that we are the team at the top because we’ve got someone who can do that. That gave us a boost and then one becomes two and that becomes three.

“We can now move on and prepare for Salford next weekend. It was a close game here earlier in the season, a game that had everything really. I’m sure it will be another battle between two decent teams.”