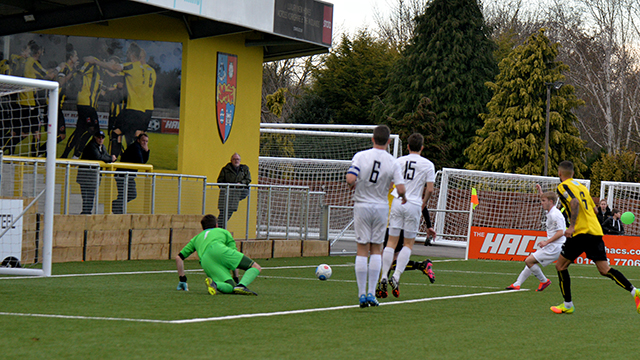 AFC Fylde goal hero Matty Hughes was delighted to play his part as the Coasters extended their lead at the top of the National League North.

Hughes pounced in the final moments to snatch a 3-3 draw at play-off chasing Harrogate Town on Saturday to lift Fylde 11 points clear of second-placed Salford City.

The goal brought the Coasters’ tally to 100 for the season in all competitions and Hughes believes it could have been one of the most important yet after watching all their rivals drop points.

Salford and Kidderminster both suffered defeat whilst play-off hopefuls Chorley, Halifax and Stockport all had to settle for a point in their games.

“We shouldn’t be conceding three and I think we brought the goals on ourselves,” admitted Hughes. “But I’m really glad that we managed to come away from the game with a point.

“Even though we didn’t get maximum points, we still managed to extend our lead at the top of the league and that’s the main thing. Above all, we had to make sure we didn’t lose and having seen the other results, our point is a massive bonus.

“You never know how results will go between now and the end of the season and a point could decide the league in the end, so every single one is important.”

Speaking of his goal, the former Fleetwood man said: “I saw Rowey chop back inside and I just tried to get myself into space at the back post in case the keeper fumbled his shot. Thankfully he did and I just concentrated on getting a good connection and putting it away.”

Hughes has been used primarily as a substitute for much of the campaign but is hoping his late heroics have given manager Dave Challinor something to think about.

“It’s no secret that I’m keen for a bigger role in the side and hopefully this has put me in contention for a starting spot next weekend at Gainsborough. The team is doing very well at the moment so the competition is fierce and I have to just keep doing my best and grab my chance when it comes.”

The Coasters are in prime position for automatic promotion to the National League next season, but Hughes has issued a warning to his teammates.

“We were battered and bruised by the end of Saturday’s match and every one of us knew that we had been in a game. If we go up then it will be like that every week next season so we have to be ready.”