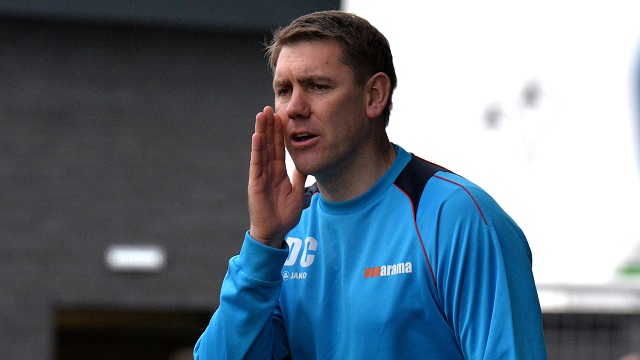 Fylde, who themselves came unstuck against Stalybridge at the weekend, lead the pack in the National League North by six points with just four games to play.

Challinor’s side face a double-header of games over a season-defining Easter weekend, first travelling to third-placed FC Halifax Town on Good Friday before welcoming Bradford Park Avenue to Mill Farm on Monday.

Two victories from the final four matches will see the Coasters all but wrap up the title due to a far superior goal difference, but Challinor is taking nothing for granted just yet.

Challinor said: “There’s no doubt that last night’s result went in our favour but we still have to concentrate on ourselves.

“We now realistically need just six points to win the title and we have a chance to do that this weekend after Kidderminster were beaten. I always expect our rivals to win all of their games, so when they don’t it’s a bonus.

“The table tends to settle down over Easter so we will have a much better idea by the end of the weekend.

“There is still everything to play for and we have a very tough weekend ahead with two games in quick succession.

“But they are two games we are very much looking forward to and hopefully we can bounce back from Saturday’s defeat at Stalybridge.

“Our focus remains solely on ourselves. At Christmas we thought 87 points would be enough to win the league and we can still get to that. It might take less now but that’s still the aim.

“Yesterday’s game makes it a little easier for us but doesn’t change what we are aiming towards.

“We want to win on Friday first and foremost and see where we are after that.”

Challinor is hoping to have a near fully fit squad to take into the weekend: “We will be last minute with a few ahead of the weekend and it’s going to be a quick turnaround between Friday and Monday.

“Caspar Hughes will train today and James Hardy is having a scan on his back today too so we will know for definite where he is after that.

“Aside from that everyone has trained and they are fit and well for the weekend.”