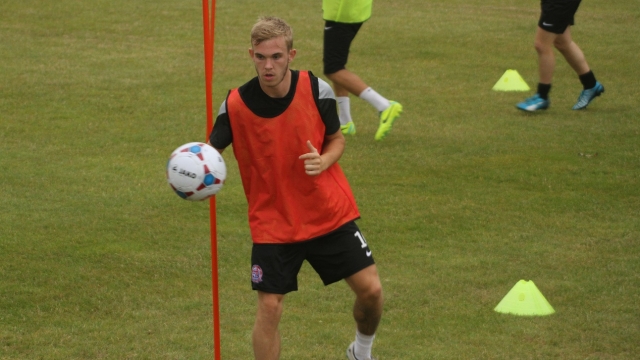 The striker has missed a chunk of pre- season with a foot injury and has sat out the opening two fixtures. He will be assessed further at training tonight by the club’s physio team.

Manager Dave Challinor said: “Matty is recovering well and should be back training on Thursday and we might give him a run out on Saturday.

“He’s a very talented player and I’m sure he’ll do very well here. He’ll be in amongst the goals and will be a big part of our plans this season.”

Challinor was clean to have a clean bill of health after Tuesday’s 2:0 win over Hednesford Town.

He added: “Overall I was pleased with the result against Hednesford – especially the way we played first half, we didn’t pick up any injuries and we can push on for Saturday. It was pleasing to win and keep a clean sheet at the same time.”

The club’s most recent summer signing Sam Finlay’s form in the first two matches of the season has delighted Challinor who has tracked the midfielder for almost three years before getting him to sign.

Challinor added: “I’m really pleased for Sam. I thought he played quite well at Solihull but against Hednesford he was excellent and everyone’s really chuffed for him to get off the mark. He didn’t play a lot of football last season because of injuries and he played a couple of games in the Champions League last month but it’s important for him to get consistent game time here at AFC Fylde and it will help him develop into a better player than he already is.”

See an exclusive interview with Sam Finlay in Saturday’s new look 48 page colour programme (below) which is on sale around the ground on Saturday at just £2. 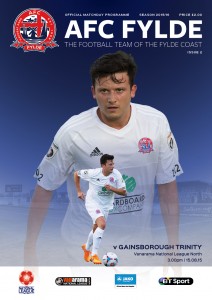