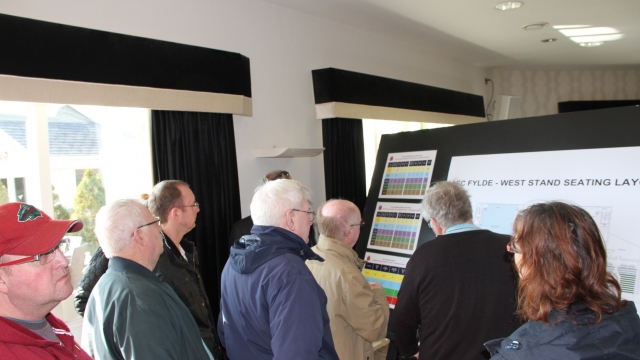 SUPPORTERS have signed up in force for season tickets at AFC Fylde’s new stadium complex.

An open day saw over 200 people come through the doors with the majority leaving signed up for a season ticket for the 2016/7 season.

All the plans for the new complex and images of the new stadium were on show for all to see, with Chairman David Haythornthwaite, Manager Dave Challinor, Commercial Manager Dave Riche and Community Foundation Director  Tom Hutton joined by club officials to promote the new facilities which are scheduled to open in early 2016.

The site for the complex will include 3G community pitches and training areas, a hotel, supermarket, industrial units while inside the AFC Fylde facility will be conference and banqueting suites, restaurants, a public gymnasium, sports bar and coffee/snack bar.

From the minute the doors opened, fans were queueing up to sign up for their ticket which were available with special on the day discount or instalments available.

Dave Riche said: “It was superb to see the interest in our Mill Farm complex and people signing up to be part of something which will be a major part of our future.

“There was a mixture of regular supporters and a lot of new faces which was very encouraging to see.

“As a club, we are doing things right from top to bottom and people want to be part of our progress.

“There is great interest from the business community in our venture and we are looking to be the flagship venue for the region.

“The deposit for the seats is just £50 for the majority which gives you a guarantee of not missing out on what will be the sporting venue to be part of.”

Supporters can still take advantage of the fantastic offers on seating available at Mill Farm by calling into our club shop in Kirkham.

Further Open Days will also be held to promote the venue as the opening date gets closer!