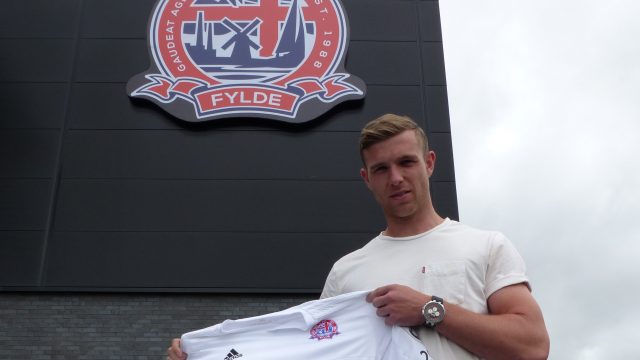 Muldoon joins the Coasters after spending two years at Lincoln where he achieved promotion to the Football League as well as reaching the FA Cup quarter-finals, defeating Premier League team Burnley along the way.

Speaking shortly after Muldoon’s arrival at Mill Farm was announced, Challinor said he was pleased to get Muldoon to Fylde following lengthy negotiations.

“We’re really pleased to get this one through the door. This is a deal that’s been going on for quite a while. We spoke to Jack right at the end of last season and he had other options so we had to work it out logistically in terms of where he was living and other things.

“To get him in is great, his experience will be massively important and he’s come from a team that has just won this division. I’ve known him for a long time and  know what he brings and how he’ll fit in.

“He can play up front on his own or out wide so he’s a really pleased one to bring in to the squad.”

Muldoon played 66 times in the National League for Lincoln over two seasons but was used as a squad player as the Imps won promotion from Non-League’s Premier division last season.

Challinor stated that he expects Muldoon to push for a regular starting berth at Fylde next season.

“I suppose for Jack, he didn’t play as much as he would have liked last season but he was part of a fantastic team that achieved an awful lot last year. I suppose if you ask him, his aim will to be a regular in the team and show what he can do himself over the course of the season.

“I’m absolutely convinced that he can score goals and give us different options. He has a bit of everything, he can play with his back to goal, he’s strong, he’s quick and can get in behind. He can finish as well so I’m sure he’ll be a really good asset for us.

“We need strength right through. If you look at the very top level, they’ll have two players for each position. We don’t have the luxury of being able to do that but we need options and if players can do that in different areas of the pitch, that’s great. Jack can do that. He can play central as a one, he can play central as a two, he can play in wide areas so he gives us lots of flexibility and is another big threat for us at the top end of the pitch.”