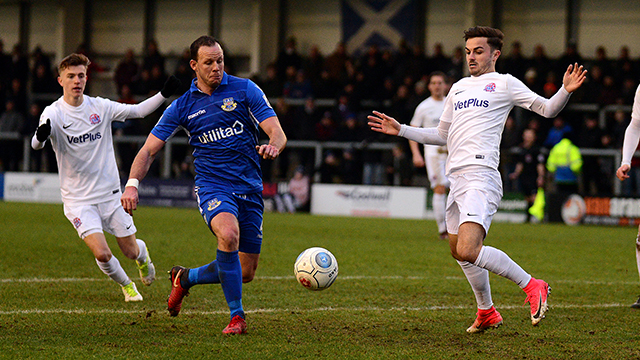 Henry back with a bang!

AFC Fylde star Henry Jones burst back onto the scene at the weekend in dramatic style on his  long-awaited return from injury.

The 24-year-old has spent a couple of months on the sidelines with a knee problem that required surgery and weeks of rehabilitation.

However, a now fully-fit Jones was thrust back into the action on Saturday at Mill Farm with the Coasters trailing Eastleigh by a goal.

The Welsh winger, alongside fellow returnee James Hardy, made an immediate impact, setting up the equaliser before notching a second leveller himself in a thrilling 2-2 draw.

Jones, who joined the club from Bangor City in the summer, insisted last week that he was ready to put pressure on the first team and did himself no harm with a sensational cameo appearance.

Jones said: “I’m really pleased to have made such an impact on my comeback.

“Myself and James (Hardy) have been out for a long time so to come in at 1-0 down and make a difference was just what we needed.

“The job as a substitute is to affect the game, particularly in our position as attackers.

“We want to get goals and assists and we both contributed. James crossed for my goal and I managed to get an assist for Zaine’s goal and score myself so it was fantastic. It’s just unfortunate that we didn’t get the three points.

“We created enough to score ten goals whilst Eastleigh created very little. It’s disappointing but from a personal point of view, coming on a goal down and helping us to get a result is a positive.

“We want to start pushing the lads in the team now. When you don’t have competition you get complacent. It’s good for me and James to be pushing the lads that have the shirt at the moment and giving the manager something to think about.

“We have spent a lot of time together over the last couple of months and it was good to finally get back out on to the pitch at the same time. It was good for us both that we had an impact.

The Coasters travel north to Gateshead at the weekend and Jones has come to accept that teams are going to make it difficult for his promotion hopefuls.

Jones added: “We have been in really good form over the last month or so and I think teams would be happy with a point against us.

“I think Gateshead will probably set up to stop us and it’s up to us to deal with that and break them down.”