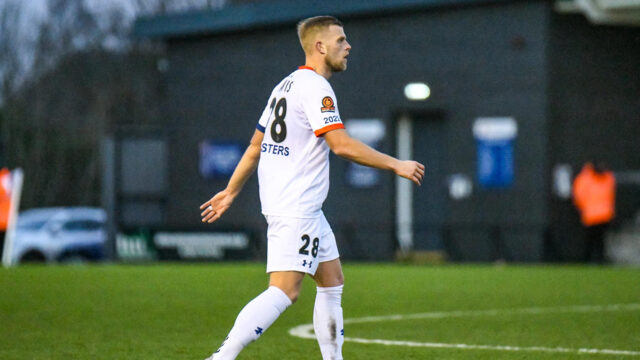 A few weeks have passed since defender Harry Davis first signed a deal at Mill Farm, and we caught up with him to discuss joining the Club, the project and aims for the rest of the season.

Davis signed from League Two side Scunthorpe United in January and has stepped into the heart of the defence and shown his quality to Coasters fans from the get-go, and he spoke of his is delight at making the move to the Fylde Coast.

“When I first heard about signing and then getting the deal itself signed, it was a crazy, hectic few days,” Davis said. “I’m delighted to be here, and I’m looking forward to my time at the Club.”

“The setup here is brilliant and impressive – It’s important that you have good facilities to work in as a player to really help you do everything the right way.

“I’m excited by the challenge. It’s a great project here and something I wanted to be a a part of to help the Club get out of this division ultimately.”

After spending most of his career higher up the football pyramid, Davis is looking forward to bringing that experience with him and the standards he sets daily.

“I base myself on setting good standards, working hard day in day out and doing my best for the team and Fylde, and I feel like I have done that so far in training and with my performances out there on the pitch.

“From my conversations with the gaffer (Jim Bentley), he wanted a bit of experience. I’ve been captain at a few clubs, so it’ll be good to bring that leadership with me here also.”

Davis joined the Club from Scunthorpe United in League Two and dropped down two divisions, but the ambition at Mill Farm is something he couldn’t ignore.

“People from the outside might look at me coming here and think that I’ve dropped down two divisions, but I see it as there is a real good project and a lot of ambition.

“It’s something I wanted to be a part of. With the infrastructure and everything that is in place, it’s designed for success, and it’s now about delivering that to come out of this division as soon as possible.”

With promotion back to the National League the aim, Davis only has that on his mind for the remainder of the season.

“A player’s career in football is short, so you want to be successful first and foremost, and if you can get as many promotions as possible at any level, you take that, and it makes me excited to be here.”