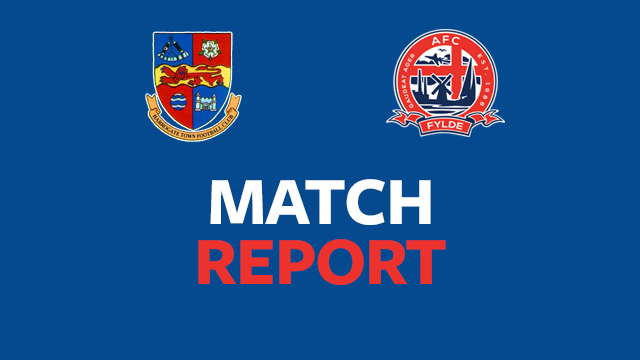 A sensational equaliser from Danny Rowe saved a point for AFC Fylde in an entertaining 2-2 draw at Harrogate Town.

Jordan Thewlis had put the hosts into an early lead, before a mistake from goalkeeper Peter Crook allowed Rowe to steal in and score.

The lively Brendan Daniels regained the lead with a stunning free-kick, but with less than 10 minutes to play, up popped Rowe with a goal of the season contender.

Dave Challinor was dealt another defensive injury blow ahead of the match with Dom Collins picking up a groin strain. Josh Langley, who missed the trip to North Ferriby at the weekend, was called upon for his first league outing for three months to partner Brad Roscoe at the back.

Midfielder Josh Wilson broke his hand last time out, so new boy Alex Marrow made his debut in the middle for the Coasters.

The first effort of the evening went to the hosts, who had made a lively start to the match. A corner from the right was cleared to the edge of the box and Lloyd Kerry Smashed the ball wide.

Daniels was next to fire at the Fylde goal, but his header at the back post on five minutes was well over the bar.

For the second time in four days, Fylde were a goal behind early in the game. Lewis Turner overlapped down the right and delivered a teasing cross that a grateful Thewlis nodded home from close range.

Challinor’s side had no answer to Harrogate’s blistering start to the match and were struggling to cope with the pace of the hosts.

Daniels was causing the Coasters all kinds of problems and only a smart save from Ben Hinchliffe on 14 minutes prevented the one-time Fylde transfer target from doubling the lead.

The chance of an equaliser for the visitors almost arrived on 25 minutes, but Rowe could not turn home after Dion Charles’ stinging strike was parried by goalkeeper Crook.

Fylde’s injury woes were heightened on 28 minutes when Alex Whittle was forced to come off.

However there was almost something for the visiting fans to cheer on the half-hour mark when the ball fell kindly at Rowe’s feet 10 yards from goal, but his low effort was turned behind for a corner.

The hosts had the ball in the net on 39 minutes when Dominic Knowles headed home, but their celebrations were cut short by the linesman’s flag.

Fylde looked a rejuvenated side after the break and Adam Sumner forced Crook into a save on 50 minutes with a whipped freekick.

Harrogate continued to press as they had done for much of the first half and went close moments later when captain Danny Ellis headed over from a corner.

The equaliser arrived on 56 minutes and it was a goal from nowhere. A clearance from Charles on the edge of his own box was misjudged by Crook leaving Rowe through on goal and he made no mistake when faced with an open goal.

However, the Coasters’ joy was short-lived and Harrogate were back in the lead three minutes later in spectacular fashion – Daniels firing home a superb free-kick from 25 yards.

Harrogate really should have extended their lead when Knowles met a cross from the right on 72 minutes, but his header from point-blank range was straight at Hinchliffe.

As the match was creeping towards its conclusion, Fylde pulled themselves back into the game in spectacular fashion. Neat interplay between Rowe and Danny Lloyd resulted in the former curling home a fantastic effort from the left wing.