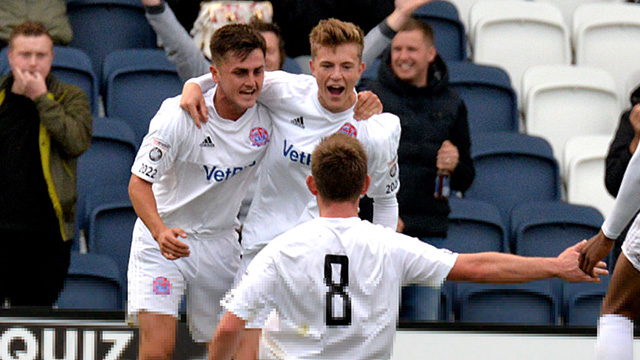 The Coasters star has been selected for England C ahead of their fixture against Estonia U23 next month as reward for his fine form this season.

Hardy netted the winner in a crucial 2-1 victory over Harrogate Town at the weekend, taking him to six goals for the season, as Fylde stretched their unbeaten record in the National League North to 15 games.

The former Manchester City man has blossomed since earning a regular starting spot in the side and Challinor insists he will only get better.

“James deserves everything he gets,” said Challinor. “He’s a level headed young man but knows himself that he is far from the finished article.

“That said, he has made some huge steps forward in a very short period of time and he will continue to improve.

“We have spoken a lot about him shooting more and adding goals to his game so it is very pleasing that he has taken that on board.

“There’s no doubt that he will end up in a central area but at the moment, whilst he is developing, it can get a bit congested in the middle and leaves his open to getting a bit of a boot.

“So for now we are protecting him by playing him in a wide position. He has the freedom to affect a game and he does that very well.”