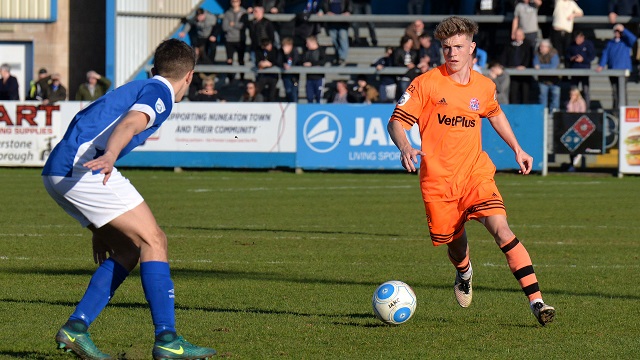 AFC Fylde star James Hardy admits he had mixed emotions following the 4-1 defeat against Nuneaton Town at the weekend.

Whilst the midfielder was pleased to get more minutes under his belt on his return from injury, Hardy insists the overwhelming feeling was one of disappointment.

The Coasters slipped to their first defeat in eight games and despite picking up just two points from a possible nine, Dave Challinor’s side still lead the way in the National League North by six points.

Hardy continued his comeback after six weeks out with another cameo appearance at Liberty Way and now hopes to push for a starting spot.

Hardy said: “In terms of the result we are desperately disappointed, but I suppose on a personal level it was good to get a few more minutes and I feel like my fitness is starting to get better.

“I will get stronger over the next couple of weeks and hopefully be involved more.

“I will see how this week goes because my injury is still feeling a bit niggly. I am just trying to manage it as well I can until the summer and then have a proper look.

“I’m hoping to be in contention for a starting spot on Saturday. I’ve been eased back into matches over the last two weeks and I’m definitely starting to feel fitter.”

Fylde found themselves three goals down at half time and Hardy admits they must find a solution to their defensive woes.

“We were poor defensively all over the pitch, not just the back four. Conceding from a throw in when everyone is back isn’t good.

“We were second best in every department and we made some silly mistakes that we were punished for.

“I’m not sure what we have to do to stop it but we obviously need to find a solution soon.

“We haven’t been creating as much at the other end over the last few weeks either so our mistakes are becoming more costly.”

The Coasters return to Mill Farm this Saturday for the visit of promotion-hopefuls Darlington. The two clubs played out a 1-1 draw earlier in the season and Hardy says his side need a “big performance” with just six games remaining.

“We are at home and the pitch will suit us a lot more than it did at Nuneaton. It is a big game for Darlington too but we have always bounced back well this season from disappointment so hopefully we can do that again.

“We need a big performance that’s for sure.”