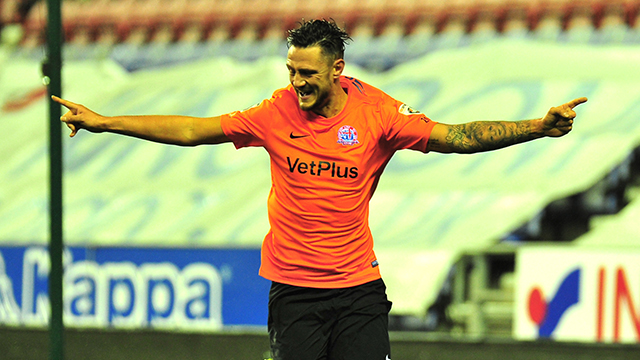 Wigan hitman Will Grigg may have broken Fylde hearts with a late double at the DW Stadium earlier in the week, however one man remains defiant following the cruel FA Cup exit.

Experienced centre-half Simon Grand – making his first start since mid-October – poked home a first-half equaliser on the night before Danny Rowe sent the visiting supporters delirious with his fifth goal of the competition.

However, Northern Ireland international Grigg was to have the final say with two goals in the last ten minutes to set up a third round tie against Bournemouth.

Despite the disappointment, Grand was determined to take positives from the experience.

Grand said: “We were obviously very disappointed and they were a lot of heads down in the changing room, but there is an awful lot that we can take heart from.

“We have a young squad and it’s up to the experienced lads to pick them up and take the positives from the game rather than the negatives.

“To lose the game so late on was massively disappointing. I think their quality just edged it in the end because it certainly wasn’t through a lack of effort on our part.

“We were realistic and we knew there would be long spells where we would have to dig in and try to nullify the threat. But when you have a player like Danny Rowe then you know there’s always a chance of a goal.

“The FA Cup throws up chances like that and it was all going to plan, it’s just frustrating that we couldn’t see it out.

“It was a great stadium to play in and the younger lads have to aspire to be playing at places like that on a regular basis. There’s no reason why a lot of them can’t do that.

Speaking of his equalising goal, Grand said: “I always set myself a target of goals and I seem to be one of the lucky ones because the ball always seems to drop to me in the box! If I can chip in then great but I’m more concerned with keeping them out at the other end.

Over 500 Fylde fans made the trip to Wigan and Grand was full of praise for the travelling support.

“The fans were fantastic. You could hear them all the way through the game. Hopefully we have given them an FA Cup experience to remember.”

The Coasters switch attention from the FA Cup to the FA Trophy this weekend with a trip to Chester in the first round and Grand is keen for another cup romance.

“Realistically this is our best chance of getting to Wembley. The highest ranked team in the competition is the team that’s top of our league so that’s as tough as it gets. We are in with every chance.

“It’s a massive opportunity for us. I’ve never really had any success in the Trophy so personally I’d love to have a good run.”