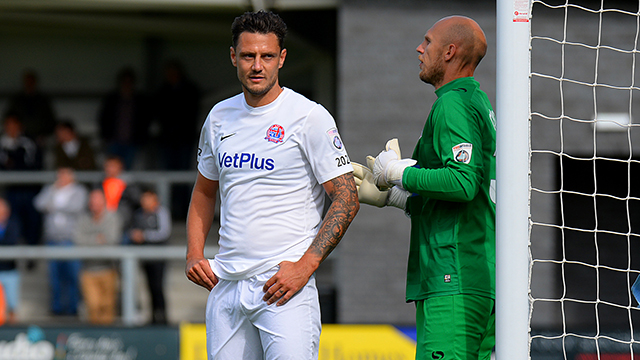 AFC Fylde centre-half Simon Grand is relishing a reunion with his former employers on Monday evening.
The Coasters have a huge Bank Holiday weekend ahead with a trip to Hartlepool United tomorrow before a first-ever live TV fixture on BT Sport on Monday.
The 33-year old, who joined the Coasters from Salford City in the summer, spent two years with Barrow, enjoying promotion to the National League in 2014-15.
Grand is now hoping to get one over some old friends but is not expecting an easy ride.
Grand said: “I had a good couple of years with Barrow. They brought me in having just won the Conference North with Telford with the aim of doing the same.”
“We went on and had a great season and managed to do it, pipping Fylde to the title!
“I look back on it with fond memories, as you do with any success or achievement.
“Knowing the manager that is there now, they will be very organised and very physical. They are a tough team to beat and they will be regimental in they way they go about playing.
“They certainly won’t make things easy for us.”
Grand has found himself thrust into the limelight following serious injury to captain Josh Langley and made a dream start netting on his full debut last weekend in the 2-2 draw against Dagenham and Redbridge.
Whilst sympathising with Langley, the former Rochdale defender is now ready to grab his opportunity with both hands.
Grand added: “What’s happened to Josh is obviously a massive disappointment for him and the dressing room too because he’s the captain and a great lad to have around. For him to be missing for so long is a blow to everyone.
“But my opportunity has come now and I have the chance to help the team pick up points and most importantly clean sheets.
“I probably feel fitter now than when I was 21. The way I have looked after myself is starting to reap its rewards.
“My brother-in-law is a professional at Preston North End and I spend a lot of time training with him and taking on his lifestyle has helped me massively.
“It has given me a new lease of life.”
The Coasters have suffered last minute heartbreak on more than one occasion in games so far this season but Grand is focusing on the positives.
“You can look at this season in two ways so far. It’s been disappointing in the way that some of the results have come about, especially when we have conceded late goals.
“On the other hand after five game we had lost just once so that’s the way we try to look at it. If we can keep up that record until the end of the month then I would class that as a good August.”
Grand has been partnered with fellow new boy Jordan Tunnicliffe at the heart of defence and the experienced defender has high hopes for his teammate.
“I played against Tunni a couple times last year and he had a fantastic season at Kidderminster.
“He is a big talent and I’m sure he will move up to bigger and better things one day.
“If playing alongside me can bring more out of him then I’ll help him as much as I can.
“He has a bright career ahead and will go up and up whether that’s with Fylde or elsewhere.
“I want my experience to help get the best out of him and the rest of the team too.”