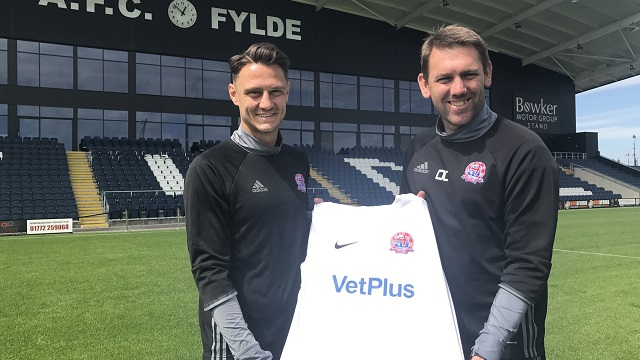 Grand keen to use experience

AFC Fylde new man Simon Grand was delighted to get a deal over the line after signing a one-year contract with the club.

The 33-year-old defender spent last season with Salford City however he joined the Coasters for pre-season and impressed boss Dave Challinor who was keen to add some experience to his youthful ranks.

The former Rochdale centre-half now hopes to add something a little different to the Fylde squad for their debut season in the National League.

Grand said: “It’s been a long time coming for me. There have been quite a few talks and I’ve been here for most of pre-season so it’s a relief to get it all sorted. I’m really looking forward to the season now.

“It’s been a great dressing room to come into, they have all been very good with me and they are a top bunch of lads.

“The squad is quite young this year so hopefully I can add some experience and leadership to that. I want to push the lads and bring the best out of others as well as myself.

“It’s good to be reunited with Jay (Lynch) too. He had a fantastic year with me at Salford last season and we know each other’s game well. Fylde have got a great goalkeeper in Jay and I think, amongst others, he can go up another level.”

The Coasters kick off the league season this Saturday against Boreham Wood and Grand insists he is more ready than ever for the challenge.

“I feel the fittest I have done for the last seven or eight years. I’ve done a lot of work over the summer and I’ve also been training with my brother-in-law who is at Preston. That’s given me a new lease of life. He has been working me hard and that has really helped my fitness this summer.

“I’m already used to playing full time football and I’m really pleased to get back to it here. I relish coming in every day to train, so that was a big draw and I’m feeling good.

“Personally I want to win a place in the starting line-up. Hopefully I can help keep some clean sheets and maybe even chip in with the odd goal. I managed to get a few last season and I take pride in that side of my game.

“As a team we are looking to be as high up that table as we possibly can be. Whether we are away at the likes of Tranmere or at home for what you might consider an ‘easier’ game – although I don’t think there will be many of those – we will want to win.

“It’s a physical league but the gaffer has put together a very good squad and everyone will be called upon at some point.”