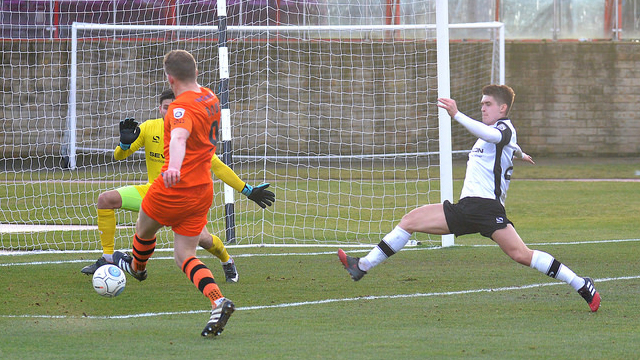 Whilst some questioned whether Rowe could replicate the form that saw him reach 50 goals last term, the 29-year-old’s match winning double at Gateshead on Saturday put him up to 18 league strikes for the season.

Rowe himself admits goalscoring opportunities have been harder to come by since the Coasters promotion to the fifth tier of English football, however the prolific frontman is making light work of the step up.

Rowe said: “I knew this season would be different in terms of scoring goals. We were scoring three, fours and fives every week last year and I ended up with 50 goals and it just wasn’t going to be that easy this time around.

“Individually and as a team, we were inevitably going to get less chances at this level but I’m delighted to be right up there again in the goal charts. I managed to get a couple more on Saturday which made up for last weekend when I felt I should have done better against Eastleigh.”

The Coasters jumped back up into the play-off places thanks to a 2-1 victory against Gateshead but Rowe isn’t getting carried away just yet.

“We would have like to keep a clean sheet but, regardless how they came, if we had been offered three points before the game then we would have definitely taken it.

“It’s a very tough place to come so it was a very good result. They had chances of their own but I thought we were completely in control.

“They scored with the last kick of the game and it was against the run of play so it was disappointing but I never felt under any real pressure.

“We need to keep winning at this stage to stay in the play-offs. I want to score goals but I’d take the points over goals every time.

“I think it’s tougher when you are in the play-offs all season because opposition teams raise their game and the pressure mounts.

“It’s great that we are in the play-offs again but it counts for nothing right now. We keep going and hopefully we are still up there on the last day of the season when it matters.”

Rowe is also delighted to have fellow forwards Henry Jones and James Hardy back in the fold:  “Henry is a very good player because he creates a lot of chances and makes clever runs. Having him and James back is a massive boost.”