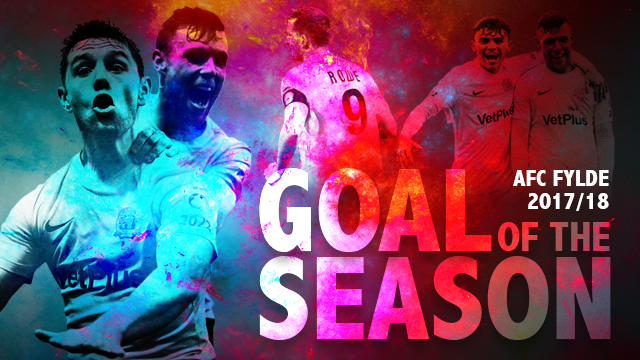 GOAL OF THE SEASON!

It’s that time again … GOAL OF THE SEASON voting is now open!

There have been some thunderbolts, sublime strikes and terrific team goals this season, but we need your help picking the best of the bunch!

The decision is set to prove tougher than ever with over 90 goals to pick from, but we have narrowed it down to ten crackers … now it’s up to you to choose!

Take a look at our shortlist below and tell us your favourite via the relavent social media posts (Facebook or Twitter) or email daniel.agnew@afcfylde.co.uk with your choice.

One lucky entrant will also win the chance to present the winner with his trophy at the final home game of the season!

Watch the video here and pick you favourite!

Henry Jones nicked the ball away from his marker in the middle of the park and fed debutant Jonny Smith who fired an unstoppable left-footed strike across goal into the far top corner.

A fine passing move resulted in Jack Muldoon playing a reverse ball through to Danny Rowe and he swept home his first goal of the season into the far corner from 15 yards.

Jack Muldoon clipped an inch-perfect cross in from the left and Henry Jones raced into the area and expertly volleyed home into the bottom corner at the first time of asking.

Striker Danny Rowe picked up the ball out on the left before cutting inside and launching a sensational strike that arrowed into the top corner from fully 30 yards.

Andy Bond’s incisive throughball sent Jack Muldoon racing in on goal and, after nipping in and out of his markers, the frontman made no mistake with a sublime finish inside the near post.

Sam Finley nudged the ball to Jack Muldoon and the forward curled a sublime strike across goal into the top corner from 25 yards.

With the scores at 1-1 early doors, Sam Finley, integral in the opener, took a touch 25 yards from goal before launching a stunning strike into the top left-hand corner.

Sam Finley advanced towards the edge of the area before crashing another stunning strike in off the crossbar (before getting sent off for his celebrations!)

Luke Burke attempted to break clear and although his was hacked down, the referee played advantage allowing Jack Muldoon to race through and lift a delightful effort over the goalkeeper.

Having already opened the scoring just after half-time, Andy Bond grabbed his second, cutting inside from the left before whipping a sensational strike into the top right-hand corner from 18 yards.