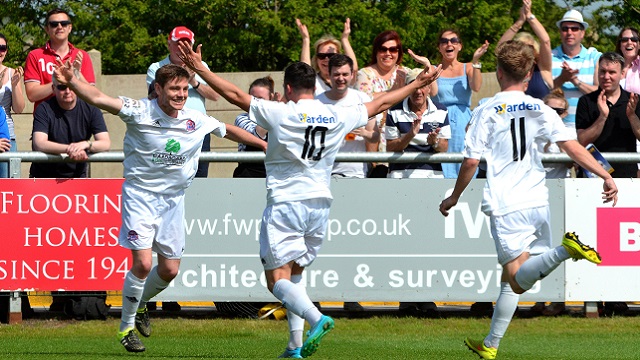 AFC Fylde goal hero Sam Finley is refusing to get too carried away ahead of Saturday’s promotion final against North Ferriby United.

Finley’s wonder strike at the weekend in the 1-1 draw against Harrogate Town sealed the Coasters passage to the final after a 1-0 victory in the first leg, but the midfielder insists there is still work to do.

Finley said: “I’m absolutely made up, but it’s still only half the job done. We need to go and win the final now against North Ferriby.

“I thought the lads were quality over the two legs and we thoroughly deserve to be where we are.

“Harrogate probably had the better of us in the first half at the weekend, but we got going in the second half and held on in the end. They were probably a bit unlucky to score in the last minute to take it to extra time, but our lads were different class and we need to kick on now and get ourselves into the Conference.”

Finley’s seventh goal of the season was certainly one to savour as he launched a rocket into the top corner from 20 yards and he admits it was made extra special by the occasion.

“I just tried to get a clean connection,” added Finley. “It came across my body and bobbled a bit towards me, but I managed to catch it sweetly on the half volley and it flew into the top corner. It’s one in a million because I don’t really score goals like that!

“It’s a shame that ‘Mr Fylde’ Danny Rowe has already won Goal of the Season because I think that would have run it close!

“I suppose it was made all the more special as it was the last ever goal scored by Fylde at Kellamergh Park. I only joined the club this season but I’ve thoroughly enjoyed it and I already can’t wait to get going next season, hopefully in the league above.”

The last trip to Ferriby ended in a 3-0 defeat, whilst the more recent home game was a much tighter affair, with the visitors running out 3-2 victors.

The Coasters now have a score to settle and Finley and his teammates are well aware of Ferriby’s threats.

“We know how they play. They play route one up to big Tom Denton and their captain Liam King, who plays off him, scores a lot of goals playing that way. The manager will have a game plan for us to stick too and hopefully we can impose ourselves on them too.

“We would have loved to go up automatically, but fair play to Solihull, they are deserved champions. So we have to do it the hard way but we are so close to achieving our aim.”