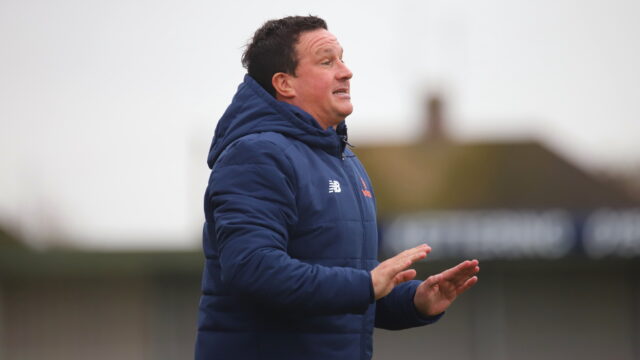 GET TO KNOW: Kettering Town

After two cup games in a row, The Coasters now return to league action as they host Kettering Town.

Tonight, we welcome The Poppies to Mill Farm for our National League North fixture – (7:45pm KO).

Kettering Town Football Club were originally founded in 1872, turning into a professional club in 1891. The Poppies started in the Midland Football League in 1892 going on to win the league in the 1895/96 season and again in the 1899/00 season. The club experienced several different leagues throughout their time, jumping between 12 leagues, before becoming founding members of the Alliance Premier League in 1979. The club remained in the top flight of non-league until the 2000/01 season. The Poppies have conquered several titles throughout their history, earning honours such as the Maunsell Cup which they won 13 times, the Southern League Championship on four occasions as well as the United Counties League on two occasions.

Kettering have also won a Conference North in 2007/08 and the Conference League Cup in 1986/87. 2011 saw the club go into administration and lose their Rockingham Road ground. The 2011/12 season also saw Kettering place bottom of the Conference National and the club was demoted to the Premier Division of the Southern League. They were also then relegated to the Division One Central after finishing bottom of the Southern League Premier Division. The Poppies won the Division One Central in 2014/15, and after a league reorganisation, the club was placed in the Premier Division Central for the 2018/19 season, which they went on to win earning promotion to the National League North. The Poppies were also famously the first British club to play with a sponsor’s name printed on their shirts, after agreeing on a deal with local firm Kettering Tyres. The FA ordered the club to remove the slogan, but chief executive and manager Derek Dougan changed the words to “Kettering T” stating it stood for Town. However, the FA ordered the club to remove the words utilising fines as a threat.

Paul Cox has been the manager at The Poppies since being appointed in October 2019. He rejoined with Kettering after already having represented the club as a player during the 1995/96 season and between 1997 and 2001, making 125 appearances for the club in total.

As a player, Cox started his career coming through the ranks at Notts County and played for the first team between 1991 and 1995. As a defender, Cox also went on to play for Hull City on loan, before spells with Kettering, Halifax Town and Hucknall Town. The Nottingham born manager started his coaching career as an assistant manager in 2003 at Eastwood Town of the Northern Premier League.

Cox then became the manager in 2006 and steered the club away from the Northern Premier League Division One relegation zone in his first season. Another highlight of his time at Eastwood was guiding the club to the Third Round Proper of the FA Cup in the 2008/09 season. Cox then took over Mansfield Town where he guided the club to the Football League, as well as another Third Round Proper of the FA Cup. Before finally settling in at Kettering, he also managed Torquay United, Barrow and Guiseley.

Luke Graham re-joined Kettering Town in 2018 for his fourth spell with The Poppies. His first season with Kettering was actually in 2005, on loan from Northampton Town, where he made 15 appearances for the club including the Conference North Play-Off Final which Kettering lost to Altrincham after extra time.

After his release from Northampton, Graham then moved on to join Kettering on permanent terms prior to the 2006/07 season. The 34- the year-old defender has extensive non-league experience, having represented over 10 clubs at the level during his career making over 450 non-league appearances in the process.

A truly old school defender, Graham has demonstrated a high amount of class and ability throughout his career and has continued to impress under Paul Cox for The Poppies. Graham has also held other positions at Kettering such as International Academy Director, whilst playing for Brackley Town, as well as having had a spell as caretaker manager for the club in 2019 in a joint position shared with former Kettering player Steven Kinniburgh. A true leader on the pitch, Graham has now accumulated over 130 appearances for Kettering during his four spells for the club.

The Poppies were victorious in their last fixture against Bradford Park Avenue, as they secured a dominating 3-1 win at Latimer Park. Mixed results for The Poppies since the 2020/21 National League North season kicked off. Kettering’s league campaign kicked off with an away loss to Gloucester City, as The Poppies were bested in a 3-1 game. However, a solid victory was obtained against Bradford PA at Latimer Park. Their first overall competitive game saw Kettering beat Chelmsford City 2-0 at home for the FA Cup Second Qualifying Round. However, unfortunate events related to the current pandemic forced Kettering to drop out of the FA Cup as well as creating a pause between the Gloucester and the Bradford PA games.

The Coasters, on the other hand, are off to a brilliant start to the season in competitive games, and after seeing off Altrincham in a 2-1 win at Mill Farm Fylde are now flying with a 5-game win streak. Fylde are also yet to concede a goal in this season’s National League North, and currently sit 7th in the table – six places above Kettering Town who are currently placed 13th. Both teams have only 2 games played. A win for Fylde could see them climb to 2nd place whilst a win for Kettering could see The Poppies catch up to Fylde. The Poppies are expected to keep a similar starting line up as in their last outing against Bradford PA.

The experienced goalkeeper Adam Collin is expected to start for Kettering, with centre backs Ryan Fryatt and captain Luke Graham just ahead of him. Powerful Gary Stohrer should be starting at right-back, with the experienced Michael McGrath starting at left-back. Connor Kennedy is predicted to be starting in midfield for Kettering, a man in form as he has now earned 2 man of the match awards in his first two competitive games this season. Kennedy is an energetic midfielder, and his attitude and determination are very important in midfield for Kettering. Leicester City youth product Ben Milnes should be Kennedy’s midfield partner. Sam Jones started in an advanced playmaker role in Kettering’s first two games but was sent off against Gloucester City after seeing his second yellow. Ben Stephens came in to replace him, and after a solid performance where he’s scored from a distance, he could very well have earned his place in this position for Wednesday’s fixture. Mansfield Town loanee Joshua Scott is expected to start on the right side in a wing position, despite also having the ability to be deployed as a striker where he possesses a strong ability to hold up play and score goals. Scott scored 2 goals in his last game for Kettering against Bradford PA. The pacey Decarrey Sheriff is expected to start at left-wing, and his trickery could be a threat to keep an eye out for. The menacing Josh Oyinsan is expected to start upfront for The Poppies. The 6’4” striker has been with Kettering since July 2020, and the young forward’s physical abilities add to Kettering’s attack and could cause a lot of trouble to Fylde’s defence.

The One to Watch

23-year-old midfielder Connor Kennedy has been an important player for The Poppies since joining the club from Corby Town prior to the 2019/20 season. The energetic Kennedy started his career breaking into the starting 11 at Corby Town at the young age of 17 and was immediately an important player for The Steelmen. An outstanding 2018/19 Southern League Division One Central season for Corby Town saw Kennedy earn his move to The Poppies, which he grasped due to the opportunity to test himself at a higher level with the chance of playing in the National League North. Kettering Town had kept an eye on Kennedy for a while before finally recruiting the midfielder. Kennedy is an energetic midfielder, with high work rates that make him the type of central midfielder that any team would want. He has the ability to play from box to box and can even find himself scoring goals, which was the case recently against Gloucester City. The tough-tackling midfielder will definitely be one to keep an eye out for on Wednesday as one of Kettering’s key players.