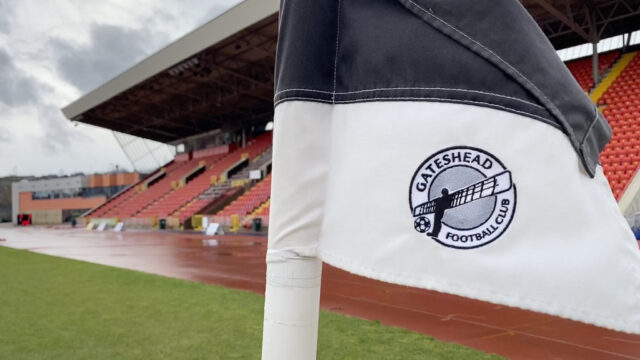 Get To Know: Gateshead FC

With the first 3 points of the season secured against Darlington last Tuesday, The Coasters now travel to the North East with hopes of continuing a positive start to this year’s league campaign.

`Get to Know´ our next opponents ahead of Fylde’s visit to the Gateshead International Stadium for this Saturday’s 3pm kick off.

Originally Gateshead existed as South Shields Adelaide, formed in 1889 and becoming members of the Football League in 1919. Financial problems hit the club in 1930, forcing the club to move to Gateshead, adopting the town’s name. However, the club was voted out of the Football League in 1960 and folded in 1973. The South Shields club was then formed to replace the original club, which was then moved to Gateshead again forming Gateshead United in 1974. Ultimately, Gateshead United was dissolved in 1977, with a new Gateshead taking over from United in the Northern Premier League.

The 1982/83 season saw The Tynesiders with the Northern Premier League with a record amount of points of 100, scoring 114 goals in the process. As a result of this, the club achieved promotion to the Alliance Premier League where they remained until being relegated in the 1984/85 season. The Heed then went on to win the Northern Premier League in the first attempt joining the now renamed Football Conference, but unfortunately Gateshead was relegated again in the next season.

Mike Williamson signed for The Tynesiders as a player in August 2018, only three years after leaving Premier League side Newcastle United. His role in the club was altered to player-coach, as a part of the new Heed manager Ben Clark’s coaching team. The summer of 2019 saw Williamson transition to the player-manager position for his first experience in management, returning with Ian Watson as his assistant after the club’s demotion to the National League North.

His first season in management saw The Tynesiders placing 7th, qualifying for the play-offs, despite having to rebuild the squad with very little time over pre-season. Williamson’s Gateshead won their first play-off game against Brackley Town on penalties, but were bested by Boston United in the play-off semi-final.

Gateshead achieved 52 points in 31 games for their first season under Williamson, with three games in hand to second placed York City – considering the club’s situation earlier in 2019, the outcome was very positive and if it wasn’t for the pandemic Gateshead could’ve very well achieved an ever better result.

Captain Nicky Deverdics re-joined The Tynesiders for a second time in August 2019, 13 years after his original stint at Gateshead.

A product of Premier League side Newcastle United’s youth academy, Deverdics first joined Gateshead after his release from The Magpies making 15 appearances before leaving to join Bedlington Terriers.

The 32-year-old midfielder has experienced quite an interesting career, featuring some spells in Europe. Following his time with Bedlington Terriers, Deverdics moved to Gretna totalling 34 appearances for the club in the two years he spent there. Gretna achieved promotion to the Scottish Premier League with Deverdics playing a key role. The club disbanded in 2008 due to financial problems and Deverdics was released, joining Barnet in League Two. He went on to make 51 appearances for The Bees winning ‘Most Improved Player’ in his first season.

Deverdics then spent the years of 2010 and 2014 between clubs regularly, starting at Conference North side Blyth Spartans before his first experience abroad with Icelandic Second tier side BÍ/Bolungarvík. He returned to England temporarily to join Alfreton Town, before joining Faroese Premier League side TB Tvøroyri leaving at the end of the season for Tadcaster Albion.

Before making his return to Gateshead in 2019, Deverdics had spells with Dover Athletic, Hartlepool United and Wrexham. 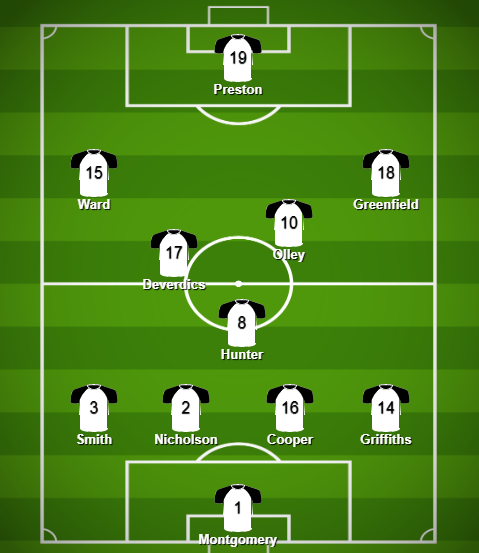 The Heed secured a win in their first outing of the season against Bradford PA, placing them 7th in the table after the season opener.

Gateshead’s last outing saw them face Bradford Park Avenue away from home at the Horsfall Stadium, where The Heed came out as winners with a 2-1 win. The Coasters will also be in an upbeat mood after besting Darlington at Mill Farm in a 1-0 win thanks to a classic Nick Haughton goal which was enough to see off The Quakers.

The Tynesiders and Fylde are both currently on three points after the season opener, so both teams will be looking for the 3 points with the chance of surpassing each other for what could be some valuable points towards the end of the season. Both teams will be fighting for that automatic access to the National League, and towards the end of the season this could end up being a key match.

Considering pre-season, Gateshead produced a mix of results considering the large amount of trialists that The Heed put out. Despite losses to National League side Hartlepool United (1-4) and National League North side Chorley FC (1-2) which saw Gateshead exit the FA Cup, The Tynesiders defeated League One side Sunderland in a 3-1 win and drew to League Two side Carlisle United – two very positive outcomes for The Heed.

The last time The Coasters and Gateshead faced each other dates back to April 2019, in the 2018/19 National League campaign. In a match held at Gateshead’s International Stadium, Fylde defeated The Heed 1-0, with a Nick Haughton goal being enough to surpass Gateshead. Fylde have faced Gateshead a total of 5 times in their history, winning 3 matches in the process. Gateshead have only beat Fylde once, in a 1-0 win at home for the FA Trophy during the 2015/16 season.

The Heed have a strong squad this season, which makes it difficult for their line-up to be predicted given the strength of some of the players missing recent games. JJ O’Donnell, who was The Heed’s top scorer and Fans’ Player of the Season for the 2019/20 campaign, has recently only been an unused substitute yet could be a top player for The Tynesiders if played.

In goal for Gateshead should be ex-Coaster James Montgomery, who re-joined Gateshead two years after leaving the club to represent Forest Green Rovers and AFC Fylde.

The full-back positions are expected to consist of Kallum Griffiths, a new signing who’s amassed 10 trophies whilst rising up non-league with Spennymoor Town, and George Smith who’s also recently joined from now League Two side Harrogate Town after achieving promotion with Town. The middle of the back four is expected to consist of 2019/20 Gateshead Players’ Player of the Season Alex Nicholson, and Rotherham loanee and Ireland youth international Jake Cooper.

Jack Hunter is another player returning to The Heed this season, and is expected to start in midfield along with captain Nicky Deverdics and Newcastle United academy product Greg Olley, who’s known for his assists and his ability to create which could be a threat to Fylde. Gateshead academy product Danny Greenfield is expected to start on the wings for The Heed having just returned from a loan at Matlock Town, and Dan Ward could be starting on the opposite side having recently joined from Irish Premier Division side St. Patrick’s Athletic.

Jordan Preston, who joined Gateshead in the summer of 2019 for a second time as Mike Williamson’s first attacking acquisition, is predicted to start up front for The Tynesiders.

Greg Olley is one The Tynesiders’ key men, and is expected to start in somewhat of an attacking midfield role for The Heed this Saturday. Gateshead’s number 10 has a power to create, due to his dribbling ability matched with his vision, which he has demonstrated several times for Gateshead especially during the 2019/20 season where he led the club for assists after achieving 15 assists for The Heed.

The 24-year-old midfielder started his footballing career as an academy player for Premier League side Newcastle United. After being released at the end of the 2014/15 season, Olley moved on to Hull City who at the time was still part of the Premier League. The Tigers gave Olley the chance to make his professional debut, playing 90 minutes for Hull in a 3-1 EFL Cup victory over Exeter City.

Olley has been a part of The Heed since 2018/19, where he signed after a successful trial with the club, where he scored 5 goals in one and a half matches. His last trial game for the club saw Olley scoring twice against Newcastle Benfield, and he immediately signed a one-year deal with Gateshead. The 2019/20 season saw Olley make 38 appearances for The Tynesiders, where he was awarded the Player of the Match award for 6 times.

The gifted midfielder re-signed for Gateshead for the 2020/21 season for his third season with the club, and the advanced playmaker is expected to be a threat this Saturday making him one to keep an eye out for. 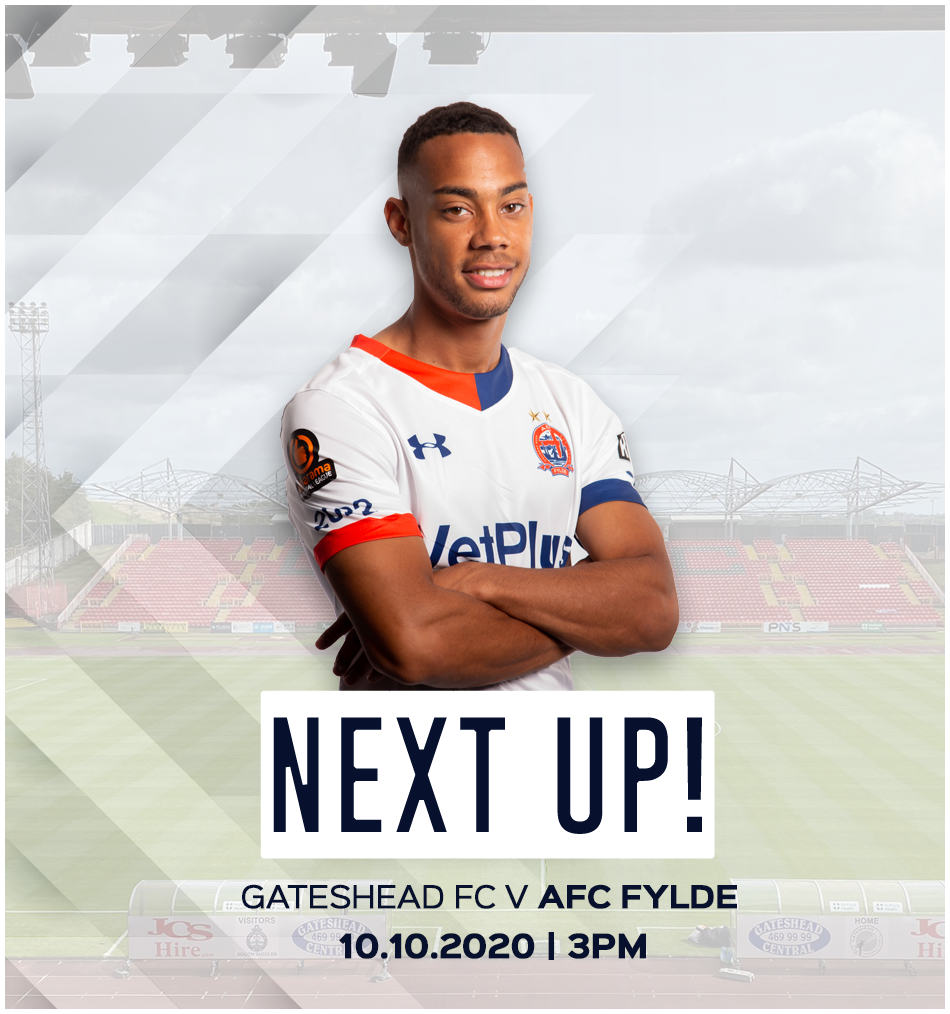