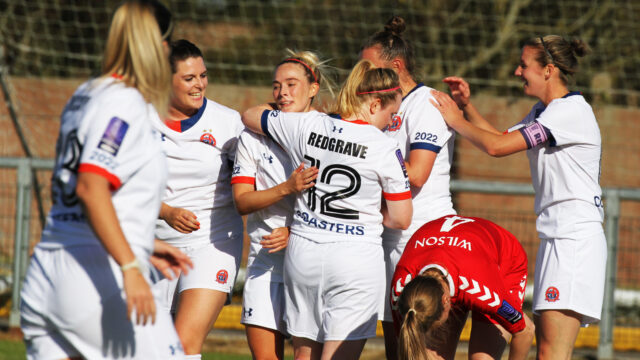 Managed jointly by Kim Turner and Danielle Young, the Fylde Women have kicked off the season in style by taking four points from their first two games.

A 3-3 draw away at one of the strongest teams in the division, Huddersfield on the opening day, was backed up this weekend with a comprehensive 3-0 victory at home to Middlesbrough.

Speaking after the game, Danielle Young gave us her account of the action as her side now look forward to another tough test on Wednesday evening when they travel to Lancashire rivals, Burnley!

Danielle told afcfylde.co.uk: “We started the game really well and we created a lot of chances but just couldn’t hit the target. Out of possession we were really well organised and working really hard in possession, maybe even too hard at times.

“At one point it seemed like it was just one of those days. Half-time came and we regrouped. We knew that once we scored one goal we would go on to get more, so we just needed to be that little bit more clinical.

“On 70 minutes Hannah Forster stepped up and calmly side footed a shot from the edge of the Boro box into the far corner, that bit of class was just what we needed!

“Nine minutes later, Emily Hollinshead went on a fantastic run and pile-drived one into the top corner which was unstoppable! To top it off, on 85 minutes Sasha Rowe netted a lovely chip.

“Overall our performance was really pleasing, we’ve had a very good start to the campaign and our aim is to just keep on improving and working harder each week. We are really happy with the way the players are applying themselves and it’s showing through the two performances so far.

“Next Up for us is Burnley away in Lancashire derby, Wednesday night 7:45 kick-off!”