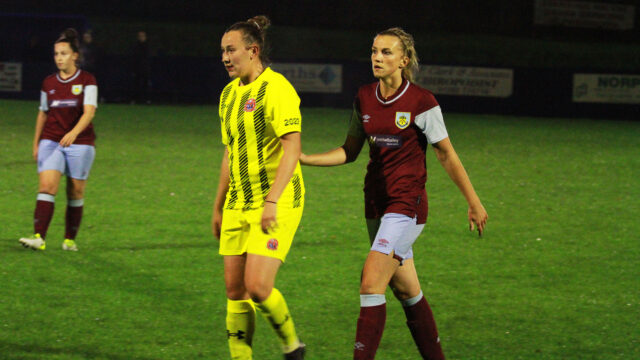 Fylde Women FC’s joint-manager, Kim Turner, gave her thoughts to afcfylde.co.uk after seeing her side continue their fine form!

The Coasters’ travelled to Lancashire rivals, Burnley, in their most recent match, having already faced Huddersfield and Boro in the first two matches of the new season.

In her own words, Kim talked us through the trip to Burnley, saying:

“We always knew the game against Burnley was going to be a tough one. They are always well organised and tough to break down, so we knew going into the game we would have to be patient.

“In the opening 15 minutes of the game we controlled the game and moved the ball well. They made a change early on which we had to adapt to, but our players did really well to stick to our game plan to see out the half.

“At half time we regrouped and we knew we had to give more to get a result. The resillience and composure we showed in the second half was top class.

We didnt get to play the football we wanted to play but we got the result we needed and deserved.

We know we have a squad of great players, with great talent. In this game we showed more than that – we showed that we work and win as a team until the final whistle.

The players have had a great week and and have prepared and recovered well together as a squad in preparation for our next game on Sunday.”