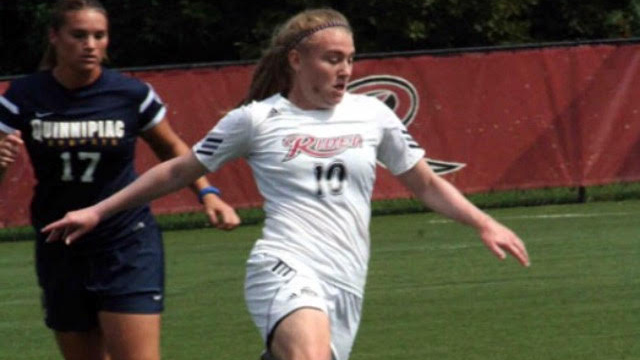 Fylde Ladies strengthened their squad at the start of the season with the addition of an exciting new star fresh from American soil.

Midfielder Hollie Kelsh landed back in England in May after spending four years in New Jersey, attending Rider University, where she studied and played football, or soccer as she was more used to hearing.

I sat her down to talk homesickness, what the American experience has taught her about herself and whether she is a dog or cat lover…

The 22-year-old was born in Blackpool where she attended primary school for a matter of weeks before moving to Crewe. There she developed her love of the beautiful game, starring for both primary and secondary school teams.

Kelsh said: “I first got involved with football through Crewe Alexandra.. They sent a scout to my primary school and asked me to go for a trial. I got onto the team and played for them for eight years.”

When she turned 18, she headed back to Lancashire and attended Preston college which is where her American adventure started – with an email out of the blue!

“When I first came back to Lancashire I played for Blackburn.

“Then, from nowhere, as I was attending College, an American coach got in touch after hearing about me on the internet. It was really weird. I guess there had been articles and news stories because I played for England at Under 15’s, 17’s and 19’s.

“He must have seen that and reached out to my college to see if that was where I attended, to see if the information was right, and then college told me and he got in touch.”

The Lancastrian received a phone call from her soon-to-be coach and that’s where her future was decided.

“It had always been my biggest dream to go to America, but I never imagined it would happen so quickly.”

Hollie arrived in the US without a clear idea of what she wanted to study. She eventually decided on a communications major and a degree in Public Relations.

Whilst in America, Kelsh admitted to missing home – and even the weather! – but admitted she was kept busy.

“Of course, I missed home and my family but there’s FaceTime so I was on that every day to say Hi. But I was really bust all the time, I was doing what I wanted to do which is the important thing and I really, really enjoyed it.

“There were moments where I really did miss home. You miss the culture, the food, your family and even the weather sometimes.”

Going over to America to play is arguably every young female footballer’s dream so I asked Kelsh what did the experience teach her about herself as a player.

“As a player I like to get on the ball, I like to beat a player. I like the ball at my feet basically. And when I went over there I still wanted to do that. I wasn’t ‘greedy’ but I suppose they helped me to learn when to release the ball better and become more of a team player.”

Having moved away from her home and country where she grew up, I also asked her what the experience had taught her about herself as a person. She took a couple more seconds to answer this one but after a few reflective seconds she responded with:

“Just that I can actually do things if I put my mind to it.

“I really struggled when I first went over there with the educational side because I went over there to play and had to do study too and I didn’t like it. However, I pushed myself and in the end, I did really well. I got my degree so it definitely showed me that I can do things if I put my mind to it.”

After talking a lot about America, I asked her what was it like coming back to the rainy North West and Kelsh’s first response was “cold.”

“I mean we had really bad winters in New Jersey so it would literally be about -9 degrees during the day with snow. But now I’m home all it does is rain. And when it’s a ‘hot’ day it’s not really. I could be cold in the Sahara Desert though!”

After experiencing football in the US and the UK, Hollie admitted to noticing a big difference at either side of the Atlantic.

“It’s a big shock at the minute coming back to the UK because the game is so different.”

She admitted football here now feels very technical whereas in America the strength and physical side was more of a focus, with more fitness and weights throughout training sessions.

After some big, thought-provoking questions about her career so far, I asked Kelsh some more light-hearted questions. She supports Manchester United (for her sins!): “I was brought up a Man Utd fan so there’s no going back now!”

Her quickest answer of the evening came when I asked her “cats or dogs?” in which she replied “dogs”.

To close the interview, I brought things back to Fylde I asked her how she felt about Sunday’s game with Fylde due to take on Guiseley Vixens in their FA Cup second round.

“I feel confident that we can get a positive result. I think we have been working hard at training to ensure that happens.”