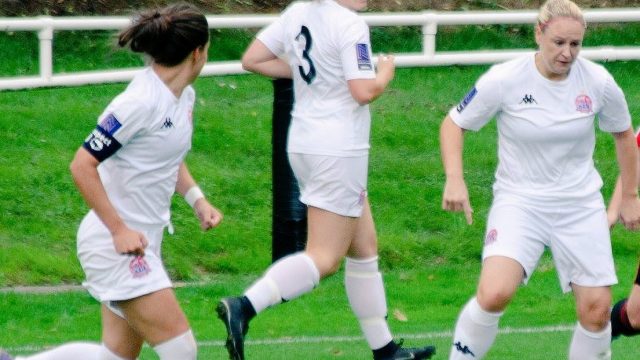 Fylde Ladies made it three games unbeaten and 0 goals conceded on Sunday. They faced a Burton Albion side from the Division below in the FA Women’s National League Cup. Burton made the trip up the M6 to face Fylde at the home ground of Squires Gate FC where the Coasters have now played for the second week.

Coming into the game Burton were unbeaten in 11 competitive games and ending last season narrowly missing out on promotion, Conrad Prendergast’s side faced the midlands side during that season and came away with a 3-2 victory.

The tie was a little more one-sided second time around with Fylde netting 9 goals in total. Twins, Erin and Lucy Staunton-Turner as well as Megan Taylor, Chloe Adams and Goalkeeper Jen Myler all made their first competitive starts for the club as manager Conrad Prendergast rotated the squad.

It was debutant Erin Staunton-Turner that first put her name on the score-sheet with a first-time strike from outside the area that found the back of the Burton goal. It was all Fylde throughout the first half, but they failed to capitalise on their possession by adding more to their first-half tally.

The second half commenced, and it only took 60 seconds for the score line to increase, midfielder Hannah Forster doubled the lead following a fantastic first touch and well executed strike from 25 yards.

Laura Merrin was next to feature, the New Zealand international who joined the club last season stepped up to take a direct free kick on her favoured left foot catching the goalkeeper off guard, the ball floated into the far side netting making it 3-0.

The goals then came thick and fast as Fylde demonstrated their quality in the opposition half. Emily Hollinshead first touch of the game came from taking the first corner of the half, she zipped a ball in finding the head of Nikki Berko who powered it home to make it four.

Club captain Danielle Young wanted some of the action, Fylde’s second corner was neatly cleared by the Burton defence and would have suspected that the danger had gone until the ball fell to Young who didn’t allow anytime for it touch the floor, volleying it into the bottom right corner. 5-0.

Emily Hollinshead turner from provider to goal scorer, the ex-Everton Ladies player replaced Laura Merrin at left back and soon showcased her trademark runs with the ball, beating two players from the halfway line to take a final touch from 30 yards and ending it with thunderous shot that gave the Burton Keeper no chance. Berko’s name appeared for the second time on the score sheet, receiving the ball on the 18-yard box she showed great skill and control to beat her marker and finished into the bottom corner. It wasn’t the last time she found herself in that position, five minutes later she received the ball again in the same position, quick feet and a smart touch gave her the space to finish again, in the same corner. Hat-trick for Berko!

With five minutes left to play and a place in the second round of the cup well and truly earned, last season’s top goal scorer didn’t want to leave without one for herself. Berko received the ball wide and provided a pinpoint cross to find Charlton who finished.

“I’m obviously delighted with today’s result, but even more so with the all-round team performance. Burton are a very good side and their stats show that, so to completely dominate the game as well as scoring an unbelievable bunch of goals from a variety of scorers was brilliant. We have a busy week now and our attentions turn to our next league game and most importantly, how we can earn three more points.”