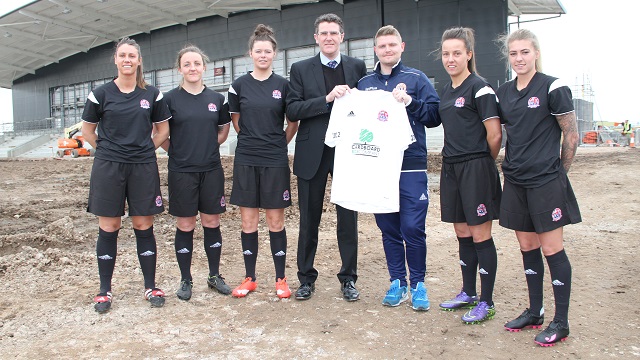 AFC Fylde are delighted to announce that Preston North End Women will be joining the club for the 2016/17 season.

The women’s team will be rebranded ‘Fylde Ladies’ and will relocate to the new stadium at Mill Farm in an exciting move by the club.

Last season the team finished runners up in the FA Womens Premier League and narrowly missed out on promotion to the Womens Super League 2.

The news comes on the back of Springfield Hockey Club also joining forces with the club to become Fylde Hockey.

Interest and popularity in women’s football has soared over the last 18 months following the recent success of the England Women’s team and the Super League and AFC Fylde Chief Executive David Chell was keen to add to the growing Fylde brand: “Ladies football is a fast growing sport and we are delighted with this latest addition to the club.

“We have plenty to offer the team, not least a state-of-the-art stadium, the likes of which will be unparalleled in the Women’s game.

“We are now looking forward to working to with the team and helping them realise their ambitions.”

Luke Swindlehurst, Ladies’ First Team Manager, said: “I’m delighted we have agreed to merge with such an ambitious club like AFC Fylde and it opens up an exciting future for women and girls football in the North West. We have had very positive discussions from the start and the most pleasing thing is that our ambitions are aligned.

“As a club we are fully committed to reaching the FA WSL and believe AFC Fylde have the resources and infrastructure to help us reach our goal.

“I’ve been very impressed with the attention to detail and quality that AFC Fylde have demonstrated within the men’s team. The club has a very clear ambition to step up to the Football League and we will follow that road towards the highest levels within the women’s game.

“There are clear benefits for us on and off the field, not least of all, the new stadium at Mill Farm which will be a one of the best playing facilities within the women’s game. We want supporters to come and enjoy the whole AFC Fylde experience.

“I’m extremely excited about this new chapter for us at AFC Fylde and it will allow our standards to be pushed onto the next level. Personal thanks go out to Chairman David Haythornthwaite and Chief Executive David Chell for their vision and enthusiasm for developing our club.

“We have been given the green light from the Football Association, County FA and FA Women’s Premier League and they were fully supportive of the changes.

“The new club structure will work closely with the Football Association, club partners and sponsors to ensure female football excellence is achieved.

“We are ambitious and driven to make our new home Mill Farm a community hub and flagship for women and girls football.”