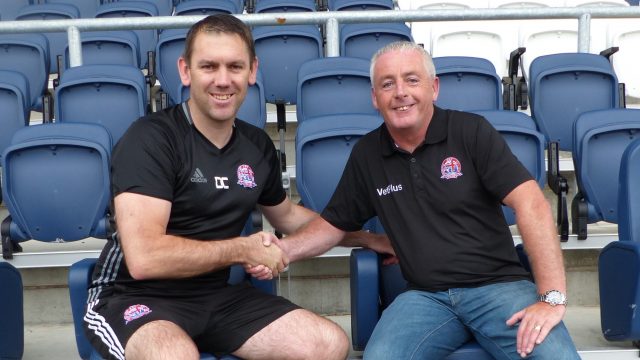 AFC Fylde can confirm that they have appointed Sean Riley as the club’s new senior physiotherapist.

Riley recently left Barrow having spent six years at Holker Street during which time they gained promotion to the National League.

Riley commented: “I’m really pleased to be here and delighted to come to a club that has been developing for a long time and with such great potential for the future. It’s fantastic to get an opportunity to work with Dave Challinor. I’ve known him for a long time and I’ve got a tremendous amount of respect for him.

“This is a great opportunity and I can’t wait to get started.”

Coasters manager Dave Challinor expressed his delight at getting Riley in before the start of pre-season which starts in less than two weeks for the Fylde squad.

“I’ve known Sean from going back to when I finished playing and he was the physio at Altrincham. We actually had opportunities over the last few years to get him in. He went to Stockport and Barrow and we’ve kept in touch.

“We were looking for someone to come in and Sean actually gave us a list of some physios that fitted the role. Then he got in touch and said he could be interested in the job. To get someone in of his experience and with his contacts is great.

“It was absolutely pivotal that we got a senior physio in before the start of pre-season. We’ve signed players this summer on contracts but those contracts are subject to medicals being passed. We needed to get someone in quickly so that we could carry out those medicals and make sure that those players coming in are fit and ready to go.

“Sean is very experienced in that role and he’ll be able to help us move forward. We want to do screening with all our players through pre-season and if ultimately we can keep the players fit, his job is lessened hopefully by the fact he won’t be seeing a lot of them.”