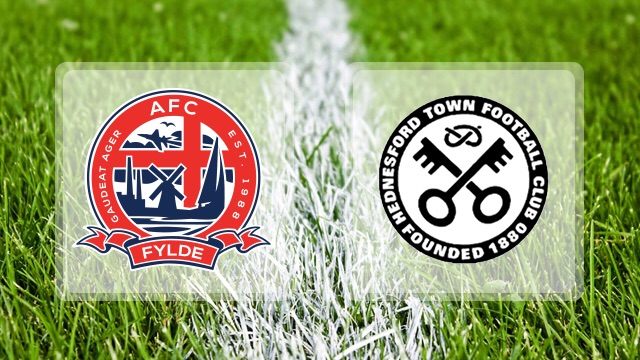 AFC Fylde fell to a disappointing defeat at Hednesford Town in a game where both sides struggled for clear chances.

Late goals from James Hurst and Richard Batchelor condemned Fylde to defeat on a bitterly cold night in Staffordshire.

Fylde started brightly with a chance from Josh Wilson but his shot was just wide of the left hand side whilst Adam Thomas shot narrowly over the bar inside the box for the home side.

On 11 minutes a good ball from Joe Booth released Matt Blinkhorn through on goal but his shot was well saved by Hednesdford keeper Danny Crane and The Coasters had another good chance five minutes later when Adam Sumner’s whipped free kick was fumbled by Crane before gathering the loose ball.

Fylde were forced into an early substitution after just 26 minutes when Caspar Hughes replaced Tom Hannigan who was struggling with illness.

The first half was a high quality affair with both sides struggling to carve out many major chances and both sides were looking well organised throughout the park Richie Allen had Fylde’s best chance of the half when he turned in the box and sent a cross come shot across the face of goal but neither of the two fylde fowards in the box could get on the end and the ball went narrowly wide.

Half time sounded with both sides reasonably happy with their performances in what was a keenly contested opening 45 minutes.

Fylde struggled for chances in the second half and Marvin Morgan went close for the home side when he beat Coasters keeper Ben Hinchliffe in the air but couldn’t control his header and it went over the bar.

The Pitmen started to assert their control on the match and had two penalty shouts turned down by the referee, much to the disappointment of the home crowd.

With twenty minutes to go Hednesdford took the lead when James Hurst reacted first to a loose ball from a corner and he fired home from all of three yards to send Keys Park into ecstasy.

Fylde tried to respond and Richie Allen volleyed narrowly over the bar from 12 yards. Fylde made a double substitution with 15 minutes to go with Liam Tomsett and on loan Wigan Athletic midfielder Matty Hamilton replacing Josh Wilson and Joe Booth.

The home side doubled their lead when striker Richard Batchelor reacted first to a throw in into the Fylde penalty area and he headed past Hinchliffe to all but confirm the three points.

The Coasters had plenty of the ball in the last 10 minutes but couldn’t produce any real openings and the final whistle sounded to condemn Fylde to defeat. The Coasters next game is away at Leamington on Saturday 7th March.

Man of the Match: Josh Langley.